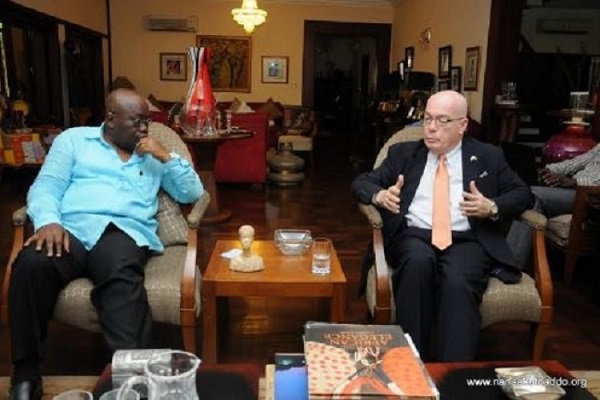 The United States Embassy in Ghana, despite the outrageous racist and xenophobic remarks attributed to President Trump has insisted US still values the people of Africa.

The US Embassy in a tweet on Saturday January 13 stated:“We have great respect for the people of Africa.”

It added: “Our commitment to Ghana and all our African partners remains strong. It’s an honor for our staff to serve here alongside Ghanaians, and we deeply value our relationship with them.” 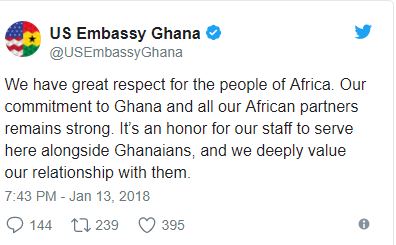 The US Embassy’s tweet comes in the wake of the wide condemnation of Mr. Trump after he in a semi-public meeting described African nations, as well as Haiti and El Salvador as “shitholes” and questioned why so many of their citizens had ever been permitted to enter America.

Ghanaian leader, President Akufo-Addo, scandalized by the development slammed President Donald Trump over his loose talk, saying Ghana will not accept his insults.

Mr. Trump has been branded a shocking and shameful racist.

In a strongly-worded statement, the UN said it was impossible to describe his remarks as anything other than racist, while the Vatican decried Trump’s words as “particularly harsh and offensive”.

The 55-nation African Union said the remarks were “clearly racist”.

Trump initially allowed reported accounts of his comments to go unchallenged, but went into damage limitation mode on Friday, insisting he had not used derogatory words – but admitting that the language he had used at a meeting with Senators on immigration was “tough”.

Mr Trump’s uncouth statement has shocked the world with US diplomats around the world being summoned for formal reproach in countries they serve.

Trump escaped official A.U. rebuke due to his respectful letter