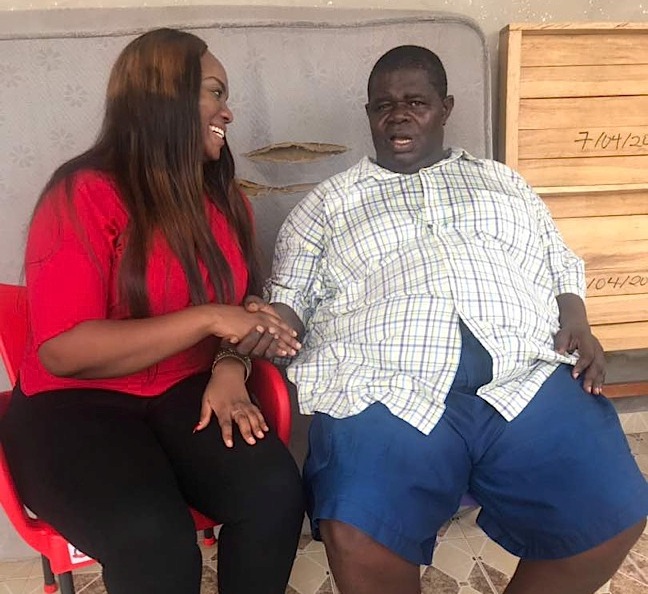 Actress Khareema Aguiar has paid a visit to veteran actor Psalm Adjetefio popularly known as T.T who is currently battling a heart condition at his residence in Accra.

The CEO of Khareema Aguiar Foundation for the Aged [KAFA] supported the ailing actor with an undisclosed amount to pay for his health bills.

She shared pictures and videos of herself with the veteran actor who featured in the popular television ‘Taxi Driver’, on her Instagram page.

The Real Colour’ actress said, “So with all the news going on of his demise,#fixingitwithrheema and @KAFA decided to pay him a visit to get to know more about his health and his current state of health”.

She continued that even in his ill state, he managed to put smiles on our faces throughout our chat with him, today we supported him with the little we had but we have to do more to improve and help FIX his state, so pls extend your support to 0244619911 and reference it TT for uncle TT or Ester for my little princess.

“…Khareema all you need in this life is to serve God in all sincerity and be kind to your neighbour because you just might not know who will be at your side when you need it most” as TT preached to the actress.

She added that “I agree with him and I guess this is a call in the right direction to support our veteran actor, father and uncle #PsalmAdjeteyfio Hopefully, we will fix this together.”

KAFA a non-profit organization seeks the warfare of the aged in the society an initiative by actress Khareema Aguiar.

The Ghanaian actor recently announced that he is no more into active acting.

The veteran actor said he wants to channel the little energy left in him to serve and do his maker’s work, something he has always craved to do, adding that the time has come for him to give his attention to God’s work since he had served the world with the best part of his life in acting.

Mzgee sent the audio to her husband – TT explains