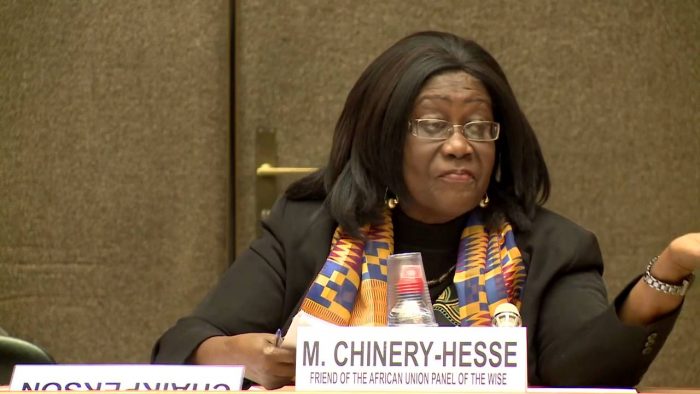 Distinguished public servant, Mrs Mary Chinery-Hesse has been appointed as Chancellor of the University of Ghana.
Mrs. Chinery-Hesse will officially begin work on August, 01, 2018, said a statement signed by the University’s Registrar, Mercy Haizel Ashia.She replaces former UN Secretary General, Kofi Annan.Chinery-Hesse has been at the forefront of public services both locally and on the international stage, and currently serves as Vice-Chairman of the National Development Planning Commission.
ProfileShe has served as a member of the country’s Board of the Centre for Policy Analysis, a Commissioner of the Public Utilities Regulatory Commission, a Commissioner of the Commission on HIV/AIDS and Governance in Africa, and a member of the Board of Trustees of the Voluntary Fund for Technical Cooperation-UN High Commissioner for Human Rights.Ms Chinery-Hesse previously was Deputy Director-General of the International Labour Organisation between 1989 and 1999. Before that, she was Resident Representative of the United Nations Development Programme in Sierra Leone, Tanzania, the Seychelles and Uganda.Before joining the United Nations, she was Principal Secretary, Ministry of Finance and Economic Planning, and Secretary of the National Economic Planning Council.
She also served as Chairperson of the Consultative Committee on Programme and Operational Questions (CCPOQ) of the United Nations from 1993-1998, Chairperson of the Commonwealth Expert Group of Eminent Persons on Structural Adjustment and Women, which prepared the book Engendering Adjustment; a member of the Council of African Advisers of the World Bank from 1992-1998; a member of the Eminent Persons’ Advisory Panel of the African Union; Chairperson of the High-Level Panel of Eminent Persons on Review of Progress in the Implementation of the Programme for the Least Developed Countries in the 1990s; and a Member of the Distinguished High-Level Panel of Eminent Persons on Financing for Development (Zedillo Commission).

Germany’s Olaf Scholz takes over from Merkel as chancellor