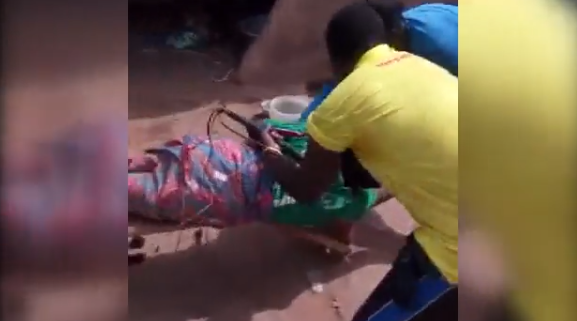 The Minister for Gender, Children and Social Protection, Otiko Afisah Djaba has directed the Domestic Violence and Victims Support Unit(DOVVSU)to investigate the brutal horse whipping of a young girl seen in a video rife on social media.

The distressing video which has stirred public outrage captures a poor girl being pinned down on a bench by two adults while two others lashed her mercilessly with horse whips.

This is reportedly said to have taken place in the Northern regional capital Tamale.

A statement from the Minister called for the arrest and prosecution of the perpetrators in the video.

“We unreservedly condemn the shameful act circulated on Ghanaweb and other media platform, the video of this girl who was being whipped and kicked for coming home late, and call on the Ghana Police Service and the Domestic Violence and Victims Support Unit(DOVVSU), to immediately investigate and prosecute this matter as the perpetrators are identifiable.

“While the ministry respects parents rights to discipline their children, we wish caution parents that these rights are governed by law as contained in the children’s Act(1998) Act 560 and parents who violates the rights of children are liable to arrest and prosecution.” the statement read in part.

E/R: Man arrested for abducting girl, 14, and defiling her 20 times

C/R: Girl, 14, killed and dumped in a bush at Twifo Agona