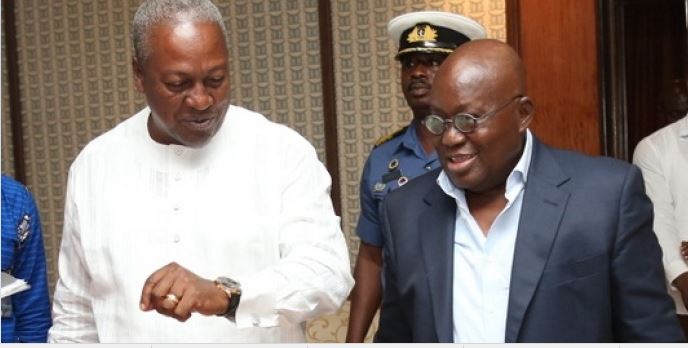 Former President John Dramani Mahama has added his voice to public pressure on his successor, Nana Addo Dankwa Akufo-Addo, to ensure that the reconstruction work on the widely lamented Bolgatanga-Bawku-Pulmakon Road is continued and completed.

The dreadful highway, which links Ghana to her West African neighbours through the Upper East region, was awarded at Gh¢612 million to Brazilian construction firm Queiroz Galvão in the middle of 2016 by the Mahama Administration.

But work slumped into a ‘moonwalk’ pace and later came to a halt after the company pulled out its equipment from site and laid off hundreds of casual workers in 2017 over alleged nonpayment of some arrears by the Akufo-Addo Government.

The former President was addressing supporters of the opposition National Democratic Congress (NDC) Saturday at a rally held to climax the party’s ninth Unity Walk in the Upper East regional capital, Bolgatanga.

“But I have one appeal, one appeal,” he said amid a nonstop outcry from the supporters over that road. “If there is one project that we started, that is critical to the economic development of the Upper East region, then it is the Bolga-Bawku Road.”

He added: “If President Akufo-Addo won’t do anything for us in Upper East at all, we beg him, as for that road, he should continue it and finish it for us.”

His touch on the 116-kilometre-long road marked perhaps the best part of his unscripted 18-minute-long address to the NDC members in the region because it was at that point cheers and blasts of vuvuzelas shot to the peak. – Edward Adeti