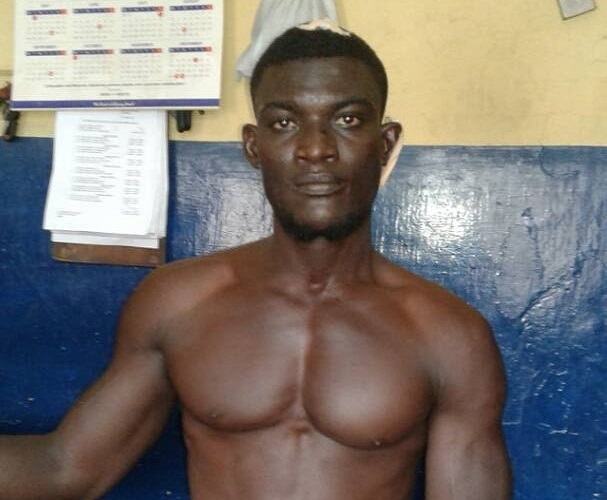 The Suhum Municipal Police Command has arrested a 28 year old unemployed Nana Addo Ofori popularly known as Abode3 for stabbing a 25 year old  Farouk Umar with broken bottles in his abdomen and shoulder.

The victim is currently on admission at the Regional Hospital,Koforidua having been referred from Suhum government hospital where he was first rushed to.

The incident is alleged to have been triggered by a feud over a lady.

Information gathered indicates that, suspect and his friends were having fun at E- Pub, located at Suhum T- Junction around 12:30 am on Monday May 7,2018 while the victim was with some ladies.

The suspect alleged to be snatching ladies from their boyfriends with a charm called one of the ladies who were with the victim ostensibly for amorous relationship but was snubbed. A situation which angered the suspect to spew vulgar words against the lady.

The reaction of suspect infuriated the victim who also reacted harshly to him leading to a brawl in which the suspect broke a beer bottle to stab the victim in his abdomen and shoulder.

This created chaotic scene and attracted other followers of the suspect mostly from his place of abode-Graiba Zongo to fight for him while other residents massed up to the scene.

However, when the suspect and his gangs spotted a mob trooping to the scene holding clubs and metals, he jumped into an unregistered Toyota Camry with numbered DV 2795 A and sped away.

The Suhum Police Patrol team which got wind of the incident pursued the suspects who abandoned their vehicle sensing danger to run away, but the main suspect was arrested while others managed to escape.

Man stabbed to death during fight over woman