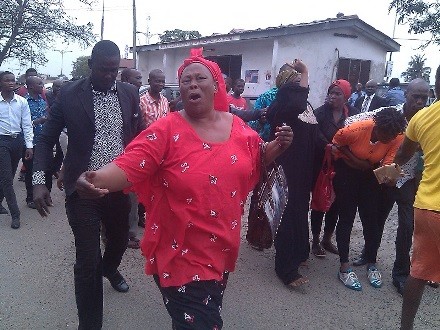 The New Patriotic Party(NPP) supporter, Hajia Fati who assaulted an Adom FM reporter, has apologised to the media fraternity for her actions.

Hajia Fati reportedly slapped the journalist from the Multimedia Group, Ohemaa Sakyiwaa Ahwenepa at the NPP party’s office on Friday, but said she only took that action because the reporter had not sought her permission before taking pictures of her, neither did she introduce herself as a journalist.

The victim had been assigned to the NPP headquarters on Friday to report on events as suspended Second Vice Chairman of the party, Sammy Crabbe had gone to the office to pick forms to contest the party’s chairmanship position at the upcoming National Delegates Congress.

The incident was recorded just a day after the celebration of World Press Freedom Day here in Ghana.

Hajia Fati who confessed to the act on Television said she mistook the lady for an onion seller.

There have been barrage of condemnations against the maverick supporter of the governing NPP including her own party that issued a release condemning and dissociating itself from the assault.

Speaking at the party’s headquarters on Wednesday,the NPP activist said her action was a mistake, pleading for forgiveness.