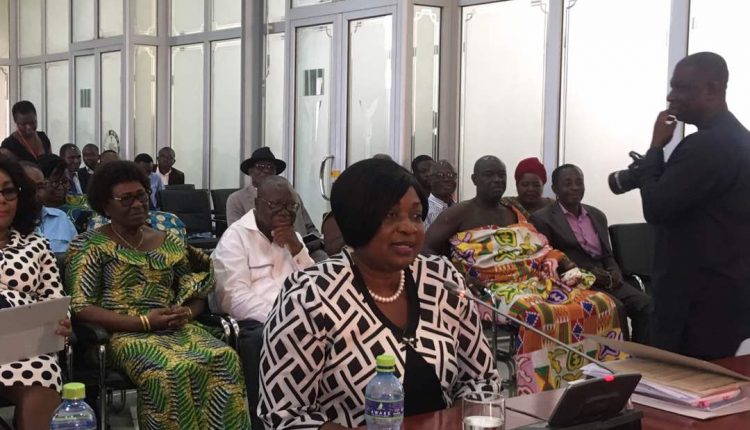 Deputy Special Prosecutor-nominee Cynthia Lamptey has said the anti-graft office is mostly challenged by prosecutions relating to indictments under Presidential Commissions of Inquiry, because such cases do not come with any docket.

She told Parliament’s Appointment Committee that  it’s in the purview of the Police to work on such cases and produce dockets on it, but said typically findings on such cases are mostly catalogued as white paper, which ordinarily makes it difficult to start legal proceedings against persons indicted in court.

She was responding to a question posed by, Member of Parliament for Odododiodio, Nii Lante Vanderpuye on the reasons why it’s always difficult to prosecute, especially indictments under Presidential Commissions of Inquiry.

But according to Madam Lamptey, it will be difficult for the Special Prosecutor to make a case against indicted officials vis-à-vis Presidential Commissions of Inquiry , if her office is not fed with dockets to prosecute in court.

“Those cases should be investigated by the police. Most of the time, its only the white paper and what not; if you do not have a docket on it you can never prosecute it. And most of the time, they are not translated into dockets. We only deal with dockets so if the dockets do not come to us we cannot tackle it.” she said during her vetting Wednesday.

Madam Lamptey comes to the position with at least 30 years experience at the bar. She also served as the Director of Public Prosecutions.

All things being equal, should Madam Lamptey pull through her vetting by parliament, she would deputize the opposition stalwart, Martin Amidu at the newly created role of Special Prosecutor of corruption cases.

The establishment of the anti-graft office headed by former Attorney General Martin Amidu is among a string of measures that President Akufo-Addo, has taken to stamp out pervasive corruption in the cocoa- and gold-rich West African nation.