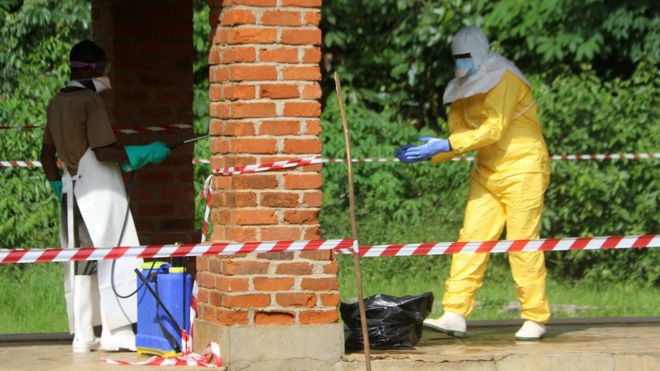 The World Health Organization (WHO) is to hold an emergency meeting to discuss the risk of Ebola spreading from the Democratic Republic of Congo.

A panel will decide on Friday whether to declare a “public health emergency of international concern”, which would trigger a larger response.

At least 44 people are believed to have been infected in the current outbreak and 23 deaths are being investigated.

Cases emerged in a rural area with one now confirmed in the city of Mbandaka.

The city of about one million people is a transport hub on the Congo River, prompting fears that the virus could now spread further, threatening the capital Kinshasa and surrounding countries.

Ebola is an infectious illness that causes internal bleeding and often proves fatal. It can spread rapidly through contact with small amounts of bodily fluid, and its early flu-like symptoms are not always obvious.

WHO has previously admitted that it was too slow to respond to a deadly Ebola outbreak in West Africa from 2014-2016 that killed more than 11,000 people.

Senior WHO official Peter Salama said the spread to Mbandaka meant there was the potential for an “explosive increase” in cases.

“This is a major development in the outbreak,” he told the BBC. “We have urban Ebola, which is a very different animal from rural Ebola. The potential for an explosive increase in cases is now there.”

Mr Salama, the WHO’s deputy director-general for emergency response, said Mbandaka’s location on the Congo river raised the prospect of Ebola spreading to Congo-Brazzaville and the Central African Republic, as well as downstream to Kinshasa, which has a population of 10 million.

“This puts a whole different lens on this outbreak and gives us increased urgency to move very quickly into Mbandaka to stop this new first sign of transmission,” he said.

The 2014-16 West Africa outbreak became particularly deadly when it spread to the capitals of Guinea, Sierra Leone and Liberia.

WHO says that of the 44 Ebola cases reported, three are confirmed, 20 are probable, and 21 are suspected.

They were recorded in Congo’s Equateur province. Mbandaka is the provincial capital.

Mr Salama said that isolation and rudimentary management facilities had been set up in Mbandaka.

He said the disease could have been taken there by people who attended the funeral of an Ebola victim in Bikoro, the south of Mbandaka, before travelling to the city.

On Wednesday more than 4,000 doses of an experimental vaccine sent by the WHO arrived in Kinshasa with another batch expected soon.

These would be given as a priority to people in Mbandaka who had been in contact with those suspected of carrying the Ebola virus before people in any other affected area, Mr Salama said.

The vaccine, from pharmaceutical firm Merck, is unlicensed but was effective in limited trials during the West Africa outbreak. It needs to be stored at a temperature of between -60 and -80 C. Electricity supplies in Congo are unreliable.

WHO said health workers had identified 430 people who may have had contact with the disease and were working to trace more than 4,000 contacts of Ebola patients who had spread across north-west DR Congo.

Many of these people were in remote areas, Mr Salama said.

There have been three outbreaks in DR Congo since the 2014-16 epidemic. Ebola is thought to be spread over long distances by fruit bats and is often transmitted to humans via contaminated bushmeat.

It can also be introduced into the human population through contact with the blood, organs or other bodily fluids of infected animals. These can include chimpanzees, gorillas, monkeys, antelope and porcupines.

It is not possible to eradicate all the animals who might be a host for Ebola. As long as humans come in contact with them, there is always a possibility that Ebola could return.

Coronavirus: Do not use untested remedies – WHO Africa warns