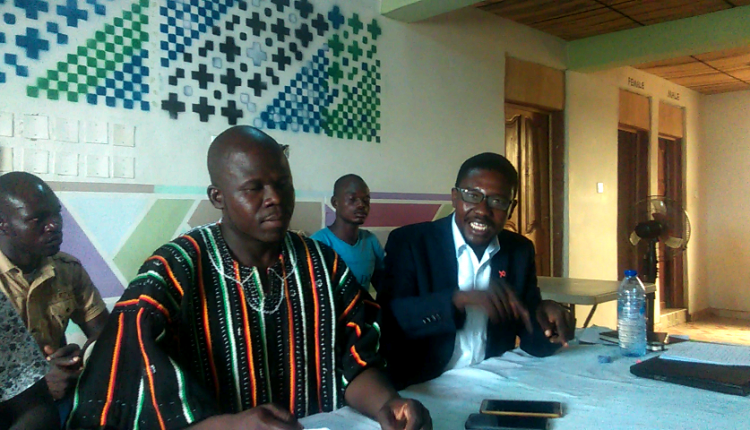 The inclusion of a teacher said to be a former activist of the ruling New Patriotic Party (NPP) on the ballot paper of the main opposition National Democratic Congress (NDC) has inflamed protests in the Zebilla Constituency.

At the centre of the dispute is the Upper East Regional Secretary of the NDC, Donatus Akamugri, whom the protesters have strongly accused of political logrolling.

“I will be requesting the National Executive Committee (NEC) to bring disciplinary actions upon the Regional Secretary of the NDC for compromising his integrity on this matter. I have evidence to that effect; but for now, I withhold it,” fumed Simon Batamya Aseno, who is contesting the Zebilla Constituency Communications Officer position.

The protesters, led by Ayendago Wusubur, a polling station youth organiser, also have warned in a press statement that “the smooth conduct of the elections cannot be guaranteed” if the NEC fails to “look into this matter swiftly”.

They resorted to a news conference after a petition they filed at the Upper East Regional Secretariat of the party, challenging the eligibility of John Atiah Asandago, was thrown out from the receiving end.

Why the Petition was Thrown Out

The aggrieved party claims Mr. Asandago, who is looking to become the next Communications Officer in the Zebilla Constituency at the upcoming polls, decamped from the elephant party for the umbrella family in 2016.

They say he is not in good standing because he reportedly has not attained the minimum four years of party membership required before one can contest an NDC executive election. They are also challenging his candidature because he allegedly ran down the NDC in favour of the NPP in the buildup to the 2016 polls.

But the committee ditched the petition, saying the protesters lacked any convincing evidence to reinforce their claims. And frustrations hit the highest point after a vetting exercise held last Saturday saw the committee add the disputed aspirant to a list of 655 eligible candidates vying for the various constituency executive positions this Saturday, June 23.

A radio presenter (name withheld), who accompanied the petitioners to the secretariat to confirm Mr. Asandago ever spoke for the NPP on his political show, was also dismissed by the Regional Secretary as the broadcaster could not present an audio proof to back his account.

“Someone searched through the system at the radio station for seven good hours. He never found the audio. Those files are not there. I can tell you, media men, that if we get that audio today, Mr. Akamugri would contest it. He would say that audio has been doctored,” Mr. Aseno ranted all the more.

Election for the communications officer position looks unlikely at Zebilla this weekend after one of the aspirants announced at the press confab he was in no-turning-back talks with his lawyers to seek an injunction on it.

“I have instructed my lawyers to seek legal remedies on my behalf on the upcoming constituency-level elections. My wish is for that category of the elections i.e. the [communications officer] component to be put on hold pending a final determination,” said Mr. Aseno as he also dismissed speculations that made the rounds prior to his arrival from abroad that he had a parliamentary dream.

He added: “I must register my displeasure about how this entire petition has been handled by the constituency and regional executives to the extent that key witnesses are purported to have been sternly warned to dissociate themselves from the matter as well as threats issued to certain witnesses that were presented by the [principal] petitioner. It is appalling and does not abide by our party’s philosophy and needs to be condemned straightaway.”

The longer the time spent at the conference, the more the numbers swelled and the higher the tempers flared.

“He is not qualified for this election because, contrary to the Clause 7 (V) of the party’s regulations that disqualifies anybody involved in an open agenda against the party, he campaigned against the NDC in the 2016 general elections.

“The other mandatory disqualification clause is that a candidate must be an active member of the party for the past four years to qualify to contest the elections. He has not done even three years let alone four to qualify,” the principal petitioner, Ayendago Wusubur, maintained at the news conference.

I have never been an NPP member— Disputed Aspirant

But when contacted, Mr. Asandago affirmed he had never been an NPP sympathiser. He said the allegations were only being peddled against him because the petitioners were threatened by his popularity among the delegates.

“My first vote was in 2004. I was with PNC (the People’s National Convention). And from PNC I moved to NDC in 2006. I never joined NPP. I was not part of the communications team and I never communicated for the NPP. In any case, assuming I was an NPP member and I joined the NDC just in 2016 as they claim, they shouldn’t have been shivering to go into a contest with me because, definitely, I would be so new in the party that people would not even know me.

“I suspect they are holding these press conferences because the delegates are for me, they are in love with me. What they are doing is just to sway the attention of the delegates just to get at least some votes. And I’m going to win not less than 70% of the votes,” he reacted.

Also reacting to the allegations in an interview with newsmen, the Regional Secretary wondered why the petitioners should blame an individual for a decision taken by a whole vetting committee.

“This meeting was chaired by the Regional Chairman, Alhaji Bolnaba himself. So, if anybody wants to make an accusation, he should be the regional executive and not individuals. On the threats of going to court, well, we wait to see. But if they had taken it through the party’s structures, I would welcome that. They are being unfair to us because they did not make the facts available to us,” Mr. Akamugri said. – Edward Adeti

NDC protests may get out of control – Asiedu Nketia