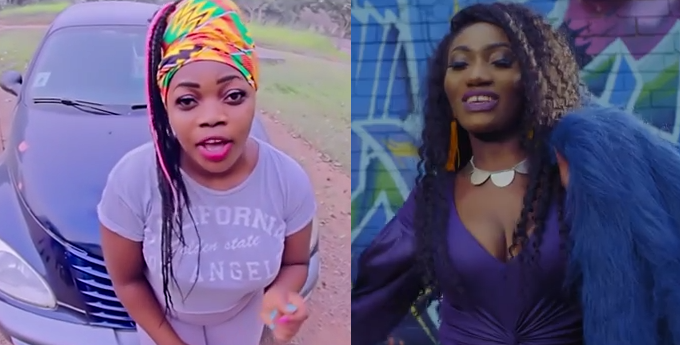 The Afrobeat Ghanaian songstress who claims to be the best female artiste in Ghana at the moment has boldly accused Wendy Shay of stealing her song titled ‘3ky3’.

“Wendy Shay or whatever her name is, the new single she has released is a song I made, she stole that song from me. If people think I’m lying, RuffTown records should come out and challenge me. You can’t even make your own songs. We’re going to talk about this issue till the last bit of it.” She said.

It is however, unclear if the two songs from the two female artistes are the same with regards to the rhythms, lyrics and beat.

Real name Mercedes Haizel Cobbinah, the songbird has been in the music industry for about two (2) years and churned out songs like Rudebwoy, Black Woman, Kumole, etc. She is currently under the belt of Music Mate Records and is out with a new breathtaking single titled Bravo, together with a beautiful video.

Though RuffTown CEO, Ricky Osei Agyemang (Bullet) stated at the time that Wendy was not a replacement for Ebony, fans still prefer to refer to her as such. Considering the fact that Wendy came up just a little under two months after Ebony’s tragic death and they having similar styles, the comparisons will never go away.
Born Wendy Addo, Wendy Shay is a Ghanaian with ties to Germany. She has lived most of her life in Stuttgart.

Watch the two music videos below.