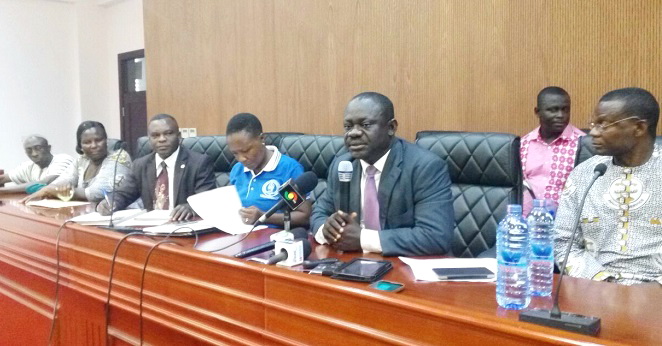 President of the Judicial Service Staff Association, (JUSAG), Alex Nartey, has called on government to as a matter of urgency, review upwards the current thirty percent (30%) retention of Internally General Funds (IGF) of the Judiciary to eighty percent (80%) in order to rescue the struggling Third Arm of Government and the delivery of justice in Ghana.

Addressing members of the Judicial Service Staff Association (JUSAG) as he and five other elected executives were sworn into office to begin their four-year term of office, President of JUSAG, Alex Nartey said, over the years, government has staved the Judiciary and violated the 1992 Constitution of the Republic by varying the budgetary allocations of the Judiciary. This he says has adversely affected the operations of the Service and it is time to put an end to these constraints on the Judicial Service. He emphasized that the upward review of the current level of IGF retention for the Service would go a long way to change the narrative in the proper functioning of the Judiciary.

The JUSAG President in his speech, also called on government to take immediate steps to pay all fuel allowances which has been outstanding since 2016. Mr. Nartey said, members of JUSAG demand that these arrears be effected to avoid any possible strike action.