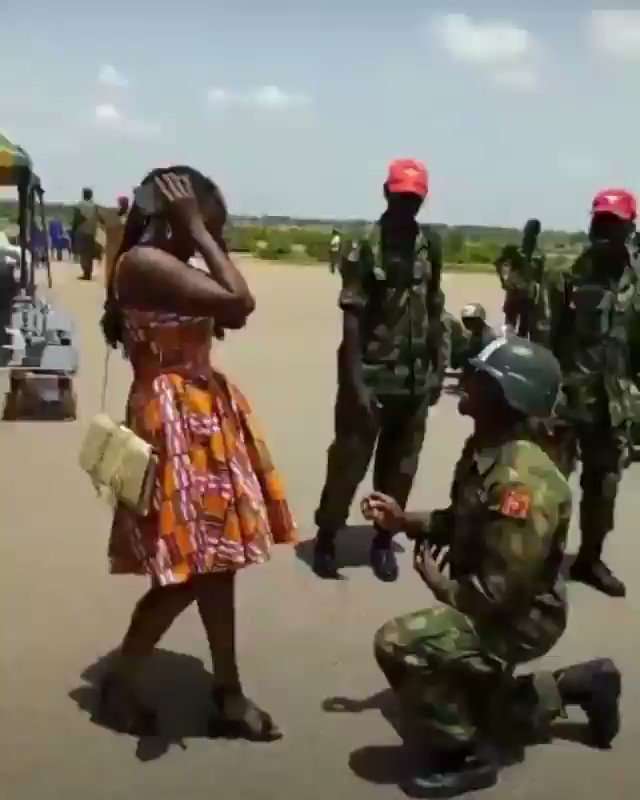 Marriage proposals are often done with the motive to get the woman surprised, hence people chose very weird ways and venues to do it, just to get the fortunate lady taken aback and speechless.

In order to make it look romantic and enviable, people have done theirs in bushes, while others have done same in public places like shopping malls and so on.

However as expected of a military man whose job has less to do with romance, a Nigerian soldier chose to shock his fiancée by jumping from a flying airplane about 5,000 feet high, just to propose to her.

According to reports, the soldier identified as Mordecai Danladi jumped with the help of a parachute to the ground, knelt down to propose to his fiancée also identified as Anna Bako.

It is also reported that Mordecai Danladi who completed his airbourne course on Friday, June 8 was accompanied by his colleague soldiers who cheered him on as he humbled himself to seek Anna Bako’s consent to marry her.

What added more beauty to the scene was the fact that Mordecai Danladi was still in the ‘dreaded’ uniform while doing the proposal.

Taking into consideration how far the military man has gone to be romantic, surprised and elated Anna Bako accepted the proposal amidst contagious smiles and joy.

Nigerian soldier jumps from plane to propose to his girlfriend ????

Nigerian soldier jumps from plane to propose to his girlfriend ????

One can only hope that officer Mordecai Danladi will continue to be romantic and make his wife-to-be happy even after marriage.