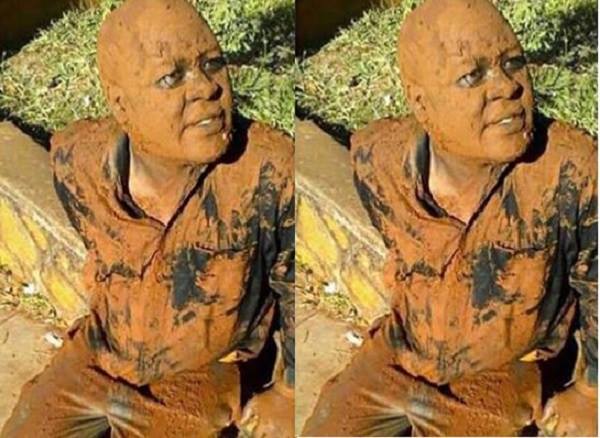 A journalist was not lucky as he was caught bonking a married woman whose husband did not take kindly to the adultery and proceeded to mete out instant justice to the ‘libidinous’ journalist for having the effrontery to ‘chop’ his wife on his matrimonial bed.

The unfortunate journalist, Clayton Masekesa, who works with Zimbabwe’s Newsday newspaper was given the beatings of his life and made to roll and bath in mud while the incident was recorded live on facebook.

Clayton Makesesa was allegedly caught at the home of Mutare City Football Club secretary general, Soul Tom. Mutare is one of the popular soccer teams in Zimbabwe.

According to reports, the journalist writes favourable stories to promote Mrs Soul Tom’s husband as a football boss while sleeping with his wife as ‘self-payment’.

Soul Tom’s wife is believed to be Masekesa’s lover for a long time and while her husband is onout of town, the journalist sneaks in and has his way freely, iHarare, a Zimbabwean blog reported.

Masekesa was humiliated and it was all caught on video. The video has now gone viral and it shows Masekesa being interrogated, beaten, humiliated and being made to display condoms, and forced to roll in mud.

The video has generated outrage and social media users are demanding that the Police investigate the circumstances surrounding the “derogatory punishment” after he was allegedly caught in a “compromising position” with another man’s wife.

Lawyer Miriam Majome said the “barbarism” in the videos is unacceptable. “Adultery is not a crime; so, there was nothing to report to the Police.

“There are civil remedies open to the husband such as adultery damages and divorce. This barbarism is unacceptable. Generally, the increasing lawlessness in this country is disappointing,” she tweeted.

See her tweet below, and check out the adulterous journalists mud rolling video too