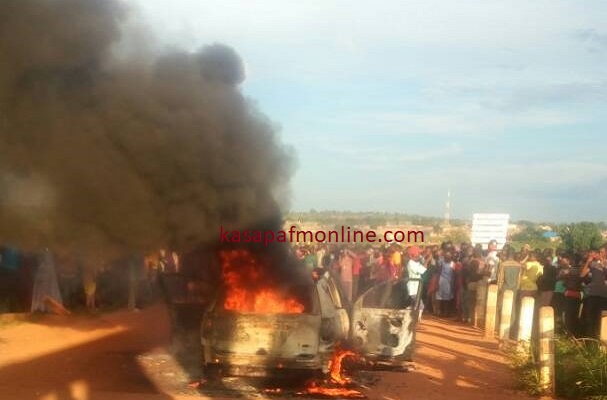 A Former Member of Parliament for Wulensi constituency , George Maban, was taken to hospital Friday evening after he survived a terrible accident that caused his vehicle to burst into flames.

The accident happened at the middle of the long Oti river bridge near the Volta region fishing community of Damanku, where the ex-MP was headed towards, at about 7pm, when the car suddenly went off and quickly caught fire.

Police officers from Wulensi in the Northern Region stationed near the busy bridge and dozens of good samaritans thronged the bridge to the rescue George Maban and a driver believed to be a mechanic, from the burning car.

The two were saved narrowly but the car ended up a total loss, in ashes.

A police officer who was part of the incredible rescue operation said the former MP suffered slight body injuries but the suspected mechanic was rescued unharmed.

The officer suspected the car was faulty. He said the exhaust pipe of the vehicle fell from the muffler and was dragging on the road when he saw it about to cross the bridge. According to him, the car blasted into a stunning fireball less than 40 seconds when it climbed the bridge.

The former MP was rushed to hospital at Nkwanta after the clinic at Damanku, both in the Volta Region, was unable to treat the burns.