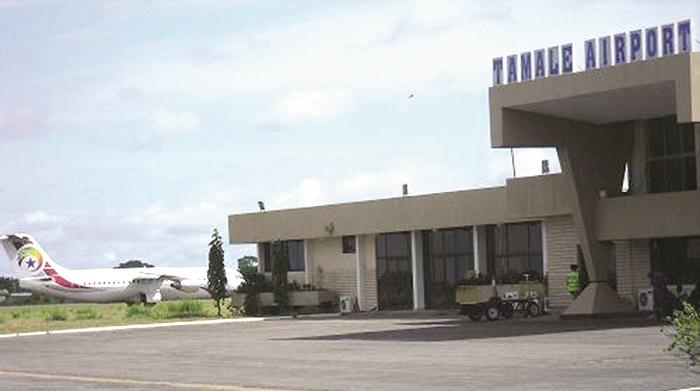 Parliament has given legal backing for the design and construction of the second phase of the Tamale Airport after approving a US$70million loan facility for the project.

This follows the approval and adoption of the report of the Finance Committee on two deals involving :  a United Kingdom Export Finance (UKEF) Facility agreement between government of Ghana represented by the Ministry of Finance and KfW IPEX-Bank GmbH, in the sum of US$56m for the design and construction of the second phase of the Tamale International Airport and ;

Tied Commercial Agreement between the government of Ghana represented by the Ministry of Finance and KfW IPEX-Bank GmbH in the sum of US$24m for the design and construction of the second phased of the Tamale International Airport.

The project which is estimated at US$70million is financed by KfW-IPEX Bank GmbH (as the original lender) under an export credit financing structure.

The credit guarantee support is provided by the United Kingdom Export Finance(UKEF). The financial package provides a 100% financial solution to ensure that the project proceeds smoothly without hindrances.

The Chairman of the Finance Committee, Dr.Mark Assibey-Yeboah, commenting on the facility told Kasapafmonline.com, Wednesday, July 25, 2018, that there is a US$10m earmarked as insurance package.

The deputy Minister for Aviation, Kwabena Okyere Darko-Mensah, also commenting on the deal  indicated that it is part of the government’s plan to make the Tamale airport “one of the busiest in Ghana and become the face of the Sahel Region”.

The objectives of the project is to design and construct the second phase of the Tamale International Airport project pursuant to the overall vision and strategy for the short to medium-term development of the airport with a well-balanced mix of business, commercial, industrial, sports and recreational areas and facilities.

The scope of second phase of the project consist ; the design for the scope of work, modular airport terminal building with approximately 5,000m square expandable in the future, Hajj facility with approximately 1,000m square, single carriage access road, landslide and airside infrastructure adapted to the terminal size as well as water, power and sewerage infrastructure deemed necessary for normal operations.

Benefits of the projects

The Airport is to be developed to have a well-balanced mix of business, commercial, industrial, sports and recreational areas and facilities.

The development of the Tamale Airport is expected to promote domestic air travel and provide the national spokes to open up the enormous potential growth of traffic in domestic and regional routes to and from the Airport in support of the KIA’s pole position to be the gateway and the aviation hub in West Africa.

It will be recalled that this project was submitted to Parliament for approval on 31st October,2016. The project was to be financed by Banco Santander with Export Credit Guarantee from the United Kingdom Export Finance.

However, Banco Santander was not able to put together the loan syndication and has been replaced by KfW IPEX-Bank of Germany.

The government of Ghana acting through Ghana Airport Company Limited (GACL)intends to upgrade Tamale Airport to be able to handle international operations.

As a strategic decision by GACL, Tamale Airport is proposed to be an alternative to the Kotoka International Airport in Accra.

Hajj: 433 pilgrims off from Tamale Airport to Saudi Arabia

Issue of being a Cabinet minister superfluous – Western Regional Minister