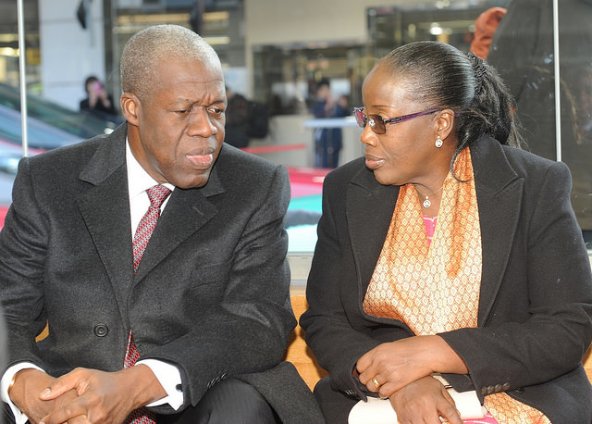 An anguished wife of the late former Vice President, Matilda Amissah Arthur has condemned what she describes as the deliberate lies and wickedness against her late husband by some politicians.

Reading a pained tribute to her late husband at the funeral service at the Accra International Conference Centre, Mrs Amissah Arthur vent her anger expressing shock at the show of love by detractors of her late husband after his death.

“Over the last few weeks, I’m amazed at the number of people who have come to show us love and I ask myself is this Ghana, are all these people in Ghana? Because the maligning, the lies, the treachery, the wickedness, the deliberately changing things so that you could look better than others, the mischievousness, I ask myself is this Ghana? I ask myself is this my own husband that people have come to pay tribute to and today I ask myself did people really know my husband, did they take time to know him, the false accusations, the lies, the maligning, did they know him? My dearest, me, Your Children, Kwesi, Maame Boatemaa, Yaw, Akyere, your grandchildren, Emily, Kwamena and Eleanor, we knew you and we know you and we know you’re a real gem, and we treasure you and we’re very proud of you.”

The 67-year-old former Governor of the Bank of Ghana died on 29 June after collapsing during a workout session at the Airforce Gym.

He will be buried today, Friday, 27 July 2018 at the Military Cemetery, Accra after his remains was laid in state at the foyer of the Accra International Conference Centre (AICC) on Thursday, July 26, where former ministers of state politicians and a government delegation led by Senior Minister Yaw Osafo Marfo, filed to pay their last respects.

Amissah-Arthur was the sixth Vice President of Ghana, in office from 6 August 2012 until 7 January 2017, under President John Dramani Mahama. Previously, he was Governor of the Bank of Ghana from 2009 to 2012.

He was sworn in as Vice-President on 6 August 2012, following vetting by Parliament.

He was nominated by Former President John Dramani Mahama to be vice president a week after Mahama himself was sworn in.This followed the sudden death of President John Atta Mills on 24 July 2012.