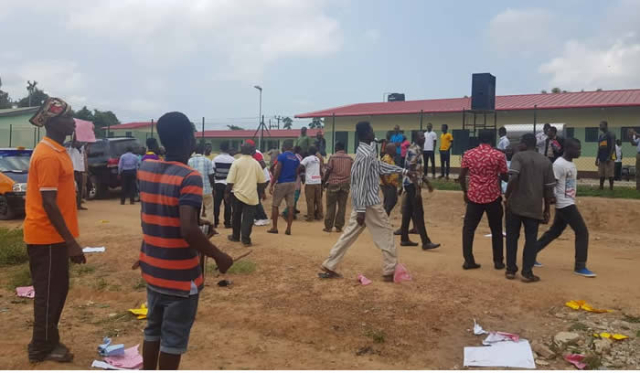 Opposition National Democratic Congress youth group at Ajumako has denied pelting stones at the Minister of Health, Kwaku Agyeman-Manu, for commissioning a polyclinic and some health projects started by the Mahama administration, on Thursday, 16 August 2018.

It was reported that some irate NDC youth in the Ajumako Sunkwa in the Central Region, clashed with their counterpart in the NPP over the commissioning of the polyclinic, questioning why the new government is commissioning a project it did not start.

It was a war of stones with supporters pelting each other at different ends.

Unfortunately, the clash by the two leading parties marred the whole event necessitating a police reinforcement team to be called in to restore calm.

But speaking on Anopa Kasapa on Kasapa Fm, the NDC Constituency secretary for Ajumako Sunkwa, Andrew Kojo Dodoo refuted claims that it was his side that hurled stones at the minister and his entourage.

According to him, the group that stormed the venue of the commissioning with placards amidst drumming and dancing were not members of the NDC.

“In the first place, how did the multimedia reporter, Seth Kwame Boateng, know that the youth who were singing and dancing were NDC youth, did he come there with an NDC register to check who is NDC and who is not” he questioned.

He explained that, the young men who were at the program were claded in NPP party T-shirts signifying their affiliation to the ruling New Patriotic Party, (NPP) and therefore cannot be said to be NDC members.

Ajumako to get University on its own – Mahama