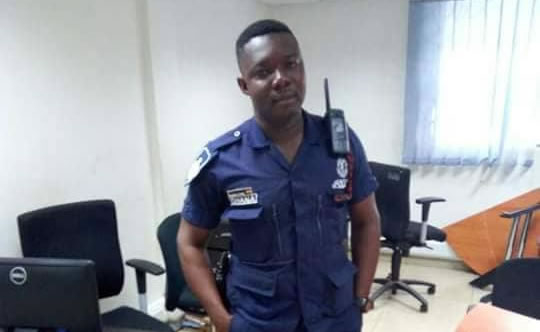 An Accra Circuit Court has granted Lance Corporal Godzi Frederick Amanor (aka Skalla), the police officer who allegedly assaulted a woman at Midlands Savings and Loans bail in the sum of GHc60, 000 with two sureties.

But, the sureties the court said should not earn less than GHc500

Describing the roles of the three officers, DSP Goege Amegah told the court that Kukua after being approached by the victim for assistance called the police officer to drag her away.

Portial Anaman, he said took the video of the incident while Ayensu, the driver helped the police officer dragged the victim out of the office.

DAILY HERITAGE Court Correspondent Muntalla Inusah who was in court reports that fresh charges were prefered after the initial charge was withdrawn.

His lawyer, Kweku Adjei Lartey said section 73 of the court act allows for an out of court settlement.

Skalla as the police officer is popularly known was charged with assault at the court, presided over by Mrs Jane Harriet Akweley Quaye while the three officers were charged with Abetment.