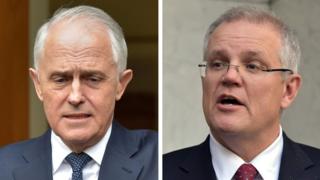 Scott Morrison is to be Australia’s new prime minister after Malcolm Turnbull was forced out by party rivals in a bruising leadership contest.

Mr Turnbull had been under pressure from poor polling and what he described as an “insurgency” by conservative MPs.

Mr Morrison, the treasurer, won an internal ballot 45-40 over former Home Affairs Minister Peter Dutton – who had been Mr Turnbull’s most vocal threat.

Mr Turnbull is the fourth Australian PM in a decade to be ousted internally.

With an election looming, MPs were nervous about the government’s poor opinion polling and recent by-election defeats.

Last week, a row over energy policy ignited long-existing tensions between Mr Turnbull, a moderate, and his party’s conservative wing.

Mr Dutton, a conservative, then unsuccessfully challenged Mr Turnbull on Tuesday, but his narrow defeat only stoked further discord.

Mr Morrison entered the race after Mr Turnbull lost key backers. After a majority of MPs called for a leadership “spill”, Mr Turnbull agreed to step down.

With a mixture of bemusement, anger and sheer frustration: many have described this week as one of the most chaotic in Australian political history.

In his final press briefing, Mr Turnbull called the week “madness” and thanked his colleagues for choosing Mr Morrison over Mr Dutton.

“We have so much going for us in this country. We have to be proud of it and cherish it,” he said.

Mr Dutton said: “My course from here is to provide absolute loyalty to Scott Morrison, and make sure we win the election.”

Foreign Minister Julie Bishop was also in the running for the leadership, but did not make it to the final round.

So Australia has its 30th prime minister, but how long before the 31st?

Scott Morrison faces an enormous task not just in healing the wounds within his party, but in winning the forgiveness of the public.

Many Australians have watched on exasperated, as normal government business was suspended to settle a political feud.

Given that an election must be called by May, Mr Morrison’s biggest challenge will be convincing the electorate that he should stay in power.

If he doesn’t succeed, expect yet another PM by June.

The past decade has been marked by a series of leadership coups, with three other sitting prime ministers deposed by party rivals.

Not a single leader in recent times has succeeded in serving a full term as prime minister, partly because elections come around so often – every three years.

So in recent years, prime ministers unpopular in the polls – or with their colleagues – have been swiftly sacrificed from within.

Under the Australian system, as in the UK, the prime minister is not directly elected by voters but is the leader of the party or coalition that can command a majority in parliament.