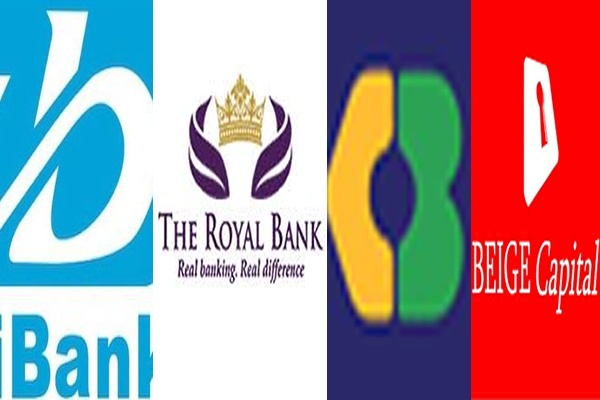 A new bank, the Consolidated Bank Gh. Ltd will be taking over some struggling banks in the country,the BoG has announced.

At least five local banks are said to have run into liquidity challenges and have been forced to come under a new merger to be managed by the state.

At a press conference in Accra, the Governor of the Bank of Ghana, Ernest Addison said the new merger will see an injection of about 450m cedis for the operation of the Consolidated Bank by the government as starting capital which will have Daniel Addo as its CEO.

Meanwhile, Sovereign Bank, according to BoG obtained their license under false pretence, and liable for criminal charges.

The governor assured clients of the affected banks their deposits are safe.

“We do not expect any immediate job losses” he added.

Below are details of a statement by the Central Bank

GOVERNMENT ESTABLISHES NEW INDIGENOUS BANK; BANK OF GHANA REVOKES LICENCES OF FIVE BANKS AND APPOINTS RECEIVER IN RESPECT OF THEIR ASSETS AND LIABILITIES

Ghana needs a strong and stable banking sector to drive the process of economic transformation. A weak banking sector means that access to credit will be limited while lending rates will continue to be high.

The Bank of Ghana is mandated by law to promote the safety, soundness, and stability of the financial system and to protect the interests of depositors. In this context, the Bank has over the last year rolled out measures to strengthen the financial system to protect the interests of depositors however, a number of legacy problems have plagued the banking sector including macroeconomic factors, poor corporate governance and risk management practices, related party transactions that were not above board, regulatory non-compliance, and poor supervision, (questionable licensing processes and weak enforcement) leading to a significant build-up of vulnerabilities in the sector.

From an Asset Quality Review (AQR) of banks conducted by the Bank of Ghana in 2015 and updated in 2016, a few indigenous banks were identified as vulnerable with inadequate capital, high levels of non-performing loans, and weak corporate governance. In August 2017, the Bank of Ghana closed two of those banks (UT Bank and Capital Bank) and approved the acquisition by GCB Bank of some of their assets and liabilities under a Purchase and Assumption Agreement. Other banks that were more recently licensed in 2016 and commenced operations in 2017 also began to show signs of distress, primarily due to conditions under which they obtained their licences.
2

Efforts by these banks to extricate themselves from financial difficulty have not borne fruit. The situation has rather worsened for these banks.

uniBank and Royal Bank were identified during the AQR update in 2016 exercise to be significantly undercapitalized. The two banks subsequently submitted capital restoration plans to the Bank of Ghana. These plans however, yielded no success in returning the banks to solvency and compliance with prudential requirements. The Official Administrator appointed for uniBank in March 2018 has found that the bank is beyond rehabilitation. Shareholders, related and connected parties had taken amounts totaling GH¢3.7 billion which were neither granted through the normal credit delivery process nor reported as part of the bank’s loan portfolio. In addition, amounts totaling GH¢1.6 billion had been granted to shareholders, related and connected parties in the form of loans and advances without due process and in breach of relevant provisions of Act 930. Altogether, shareholders, related and connected parties of uniBank had taken out an amount of GH¢5.3 billion from the bank, constituting 75 percent of total assets of the bank.

In the case of Royal Bank, an on-site examination conducted by the Bank of Ghana in 31st March, 2018 revealed a number of irregularities. Its non-performing loans constitute 78.9 percent of total loans granted, owing to poor credit risk and liquidity risk management controls. A number of the bank’s transactions totaling GH¢161.92 million were entered into with shareholders, related and connected parties, structured to circumvent single obligor limits, conceal related party exposure limits, and overstate the capital position of the bank for the purpose of complying with the capital adequacy requirement.

In the case of Sovereign Bank Limited, as part of Bank of Ghana’s investigations into the failure of Capital Bank Limited (currently in receivership), it emerged that Sovereign Bank’s licence was obtained by false pretences through the use of suspicious and nonexistent capital. The bank is insolvent and unable to meet daily liquidity obligations falling due. Liquidity support granted so far to the bank amounts to GH¢21 million as of 31st July 2018. The bank has not been able to publish its audited accounts for December 2017, in violation of section 90 (2) of Act 930.

Beige Bank and Construction Bank were each granted provisional licences in 2016 and launched in 2017. Subsequent investigations conducted by the Bank of Ghana, revealed that similar to the case of Sovereign Bank, both banks obtained their banking licences under false pretences through the use of suspicious and non-existent capital, which has resulted in a situation where their reported capital is inaccessible to them for their operations.

A more detailed description of the current situation of the five banks can be found in the attached Annex.

To help ensure that the banking sector maintains a strong indigenous presence, the government has established a new bank called Consolidated Bank Ghana Limited which will act as a bridge bank pursuant to section 127 (11) of Act 930, to assume some of the assets and liabilities of the five banks. The Government has capitalised the new bank in the amount of GH¢450 million and the Bank of Ghana has issued it with a universal banking licence with effect from 1st August 2018.

No customers of uniBank, Royal Bank, Beige Bank, Sovereign Bank, or Construction Bank will lose their deposits. All deposits in the five banks are safe. We expect that the new bank will be better governed and managed to become a strong indigenous bank to support Ghana’s economic transformation.

The Government has assured the Bank of Ghana that it will be providing financial support to other indigenous banks as needed, to help them meet the minimum capital requirement of GH¢400 million by 31st December 2018. The Government has indicated that such support will be limited to indigenous banks that are solvent, well governed and managed, in full compliance with the Bank of Ghana’s regulatory requirements, and able to demonstrate that they have been unable to access private sector solutions for recapitalization due to market conditions. Additionally, the Government has committed to further explore policy interventions needed to make the entire financial system more robust, for the benefit of the Ghanaian economy.

The Bank of Ghana remains committed to supporting the orderly development of Ghana’s banking sector, including indigenous Ghanaian banks, while promoting a strong and resilient sector to drive Ghana’s economic growth. In keeping with this commitment, the Bank of Ghana will take additional steps to ensure that all relevant parties whose actions contributed to the failure of the five banks are held accountable through administrative, civil, and criminal actions as appropriate.