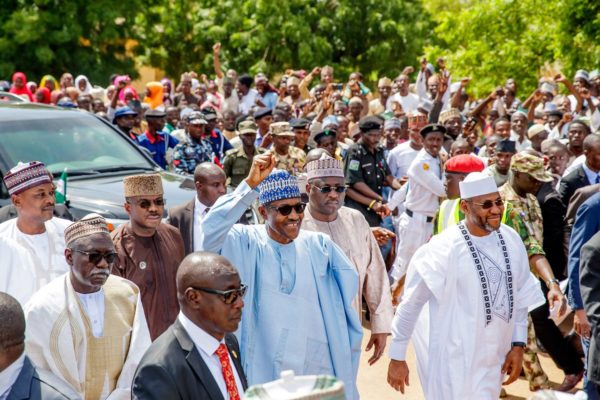 Nigeria’s President Muhammadu Buhari on Tuesday trekked 800 metres. He walked from a praying ground in Daura to his private residence to proof how fit he is.

The 75-year old leader according to his aides did so to proof his fitness to run for a second term in next year’s election.

TheNews Agency of Nigeriareports that, Buhari decided to walk after Eid prayers. He was cheered on by his supporters who lined up on the road to watch him.

Buhari has come under a lot of criticisms recently about his health. He has traveled outside Nigeria on several occasions for medical check-up.

Some of his critics say he is ‘too old’ to seek re-election. But the Nigerian presidency says Buhari’s decision to walk home shows how healthy he is.

The President’s Senior Special Assistant on Media and Publicity, Malam Garba Shehu says the trekking by the Buhari was in response to his critics.

He is quoted as saying that “I think there are two things here; one is to say that the President is responsive to the enormous support and commitment of his own people that had come out in their numbers to see him and he just decided that he couldn’t go on riding in a black vehicle and he came out and walked to the distance.

“The second thing, he is curious that these days, one or two people who are aspiring to be president are campaigning on their youthfulness and good health.”

Shehu further said that “I think the president has done one thing today – that the issue is not how old one is but how fit he is ; how healthy he is. Now that the president has proven his fitness and well-being to continue in office is a settled matter

“I think that if people want to campaign against him they should do so on issues that are of significance to Nigerians. The President is fit, he is healthy; he is good to go for second term’’.

The Nigerian leader is still hopeful he holds the key to transforming Nigeria from its current state.

He has struggled to deal with his country’s economic crisis as millions remain jobless. Buhari’s government has also failed to contain ethnic clashes and the insurgency of militant group Boko Haram.