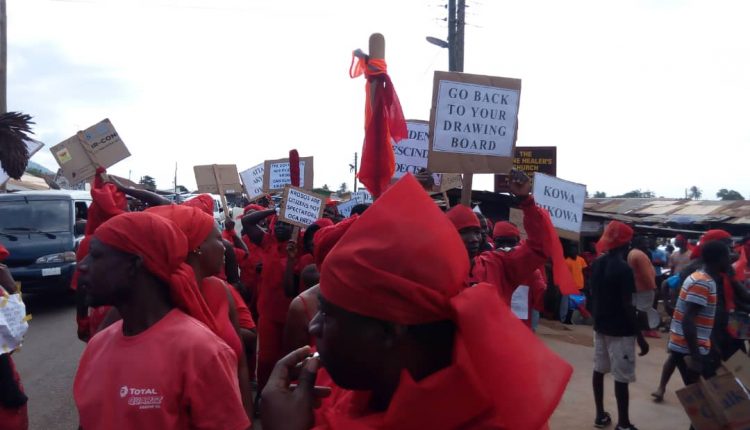 A group calling itself the United Krobo Foundation has embarked on a massive demonstration in Somanya Thursday morning against what they describe is a grand scheme by the NPP Government to relocate the main campus of the University of Environment and Sustainable Development from Somanya to Bunso in the Akyem Abuakwa area.

Hundreds of residents clad in red and black dresses wearing red arm bands and head gear massing up to kick start the demonstration.

In November last year a speech read on behalf of the President by Prof. Gyan Barfuor, Minister for Planning during the 23rd National Best Teachers and 3rd Best School Awards ceremony held in the Eastern regional Capital, Koforidua, stated that government is committed to expanding access to Tertiary Education indicating that the University of Environment and Sustainable Development would have its campus in Bonsu and Somanya instead of Donkorkrom.

“Expansion of access to tertiary Education, for Instance, the Somanya and the Bunso Campuses of the University of Environment and Sustainable Development,” parts of the President’s statement said.

This contradicted the initial plan of the University which was expected to have its main campus in Somanya and a second campus in Donkorkrom in Afram Plains North.

Former President John Dramani Mahama on December 29, 2016, cut sod for the construction of the University of Environment and Sustainable Development at Somanya, in the Eastern Region at the cost of 45 million Pounds Sterling.

The former President mentioned that Parliament had approved the contract for the construction of the modern university, which would offer degree programmes in environmental studies, climate change, urban development, Water Resources Development, Energy Sustainability, Energy Economics and Agriculture.