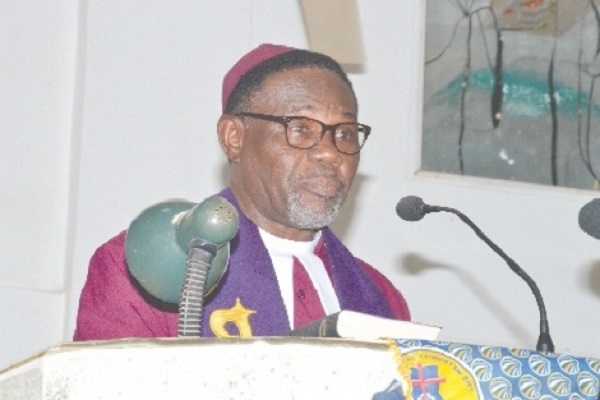 Retirement farewell service has been held in Kumasi in honour of retiring Presiding Bishop of Methodist Church of Ghana, The Most Rev. Titus Kofi Awotwi Pratt, by the five Methodist Diocese in the Ashanti region.

The outgoing presiding Bishop born into the Methodist Church by former Presiding Bishop, The Most Rev. Charles Awotwi Pratt in 5th December 1947 is retiring in September this year at age 70 for serving the church 41 years in full time ministry locally and abroad.

As part of his retirement Church activities a special send-off service has been held at Bantama Ebenezer Methodist Church which saw the attendance of all the 4 Bishops of the various diocese in Ashanti and representatives of other groups in the church with each presenting a package of gift in recognition of the retiring Bishop’s contribution to the growth of the church.

“My self your presiding bishop and my family will like to use this opportunity to thank you all for your prayers, financial among others support that made my leadership desirable as stated in your various citations presented to us. With your countless support, I trust we didn’t disappoint the church and the almighty God who call myself and my family in to the service of God’’ he asked.

He also used the occasion to render unqualified apology to some members of the church including ministers in key position who were in some way affected by some of discipline decisions he took in the interest of the church for give him and his family, since he acted in line with the constitution of the church.

“As your Bishop I have also ways been praying for such people for God to renew their strength and Christian faith in Methodist Church and God almighty who called us into the service’’.

He assured the Church he will continue to play his role as the as retired Presiding Bishop of the both physical and spiritual as his father did.

In line with the Methodist Church governing constitution, the Church will Thursday 23rd August 2018 hold a general council meeting which will be attended by all the Diocese Bishops across the country among other leaders of the Church to seek God’s face for a new presiding Bishop to direct the affairs of the church in the next three years in consultation with God through players and elections.

The conference will be used to enact new minister of the Methodist church into office as pastors to head other locals and districts.

Below is out going profile of the outgoing presiding Bishop

The most Rev. Titus Kofi Awotwi Pratt was born on 5th December 1947 to the most Rev. Charles and Mrs. Grace Longdon Awotwi Pratt. His father was elected the 4th president of conference in 1977, the very year his son Fiifi was commissioned into ministry.

He was educated at the Wesley Grammar School and Komenada College of Education where he trained as a teacher. He also attended the Victoria University of Manchester and also the University of Ghana, Legon. He did his probation at Sekondi and after his ordination; he had a scholarship to study in the United Kingdom. Whilst studying he served the Roundhay Methodist Church Ladywood, Leeds and later in the Manchester and Salford Circuits.

He returned to Ghana in 1982 to serve as Chaplain to Prempeh College. He had earlier served as Chaplain at Fijai and later as Headmaster of the then Wesley Day Secondary School, Kumasi.

In the late 1980’s he become a missionary to Gambia, first as Superintendent Minister and later as Synod Secretary until he was elected the Chairman and General Superintendent of Gambia District of British Conference.

Whilst in Gambia, he was appointed by the host Government to serve on several key a statutory body amongst which was the Law Reform Commission of Gambia between 1996 -2003. His father most Rev. Charles Awotwi Pratt

He returned home in 2003 after 14 years of distinguished service to British Conference in Gambia.

In 2011, he was elected the Bishop of Accra and four (4) years into his term, he was elected the Presiding Bishop at the 2014 Kumasi Conference. He assumed office October 2015 thus becoming the 4th person to occupy the Wesley seat since our church went episcopal. His election was auspicious and historical as it marked the first time father and son had headed the church since its establishment in 1835 in the then Gold Coast.

The Presiding Bishop is married to Mrs. Anna-Irene Pratt and they have 5 adult children.

He is one of the foremost brains behind the new fund mobilization system. No doubt, this module of resource mobilization is more objective, more scientific and more equitable as it is based on proportional remittances.

Discipleship, Evangelism and focused leadership are his passion. His pursuit of these core businesses of the church is questionable as he has backed the vision 2020 with a cutting edge leadership and personal involvement.

Under his leadership, the Methodist Church Ghana is making inroads in the Volta Region and our activities in the Northern Region have been re-engineered. He has done a lot to bridge the gap between the GHAMSU and the mother church.

Titus Glover shocked over Bishop’s decision to stop his campaign