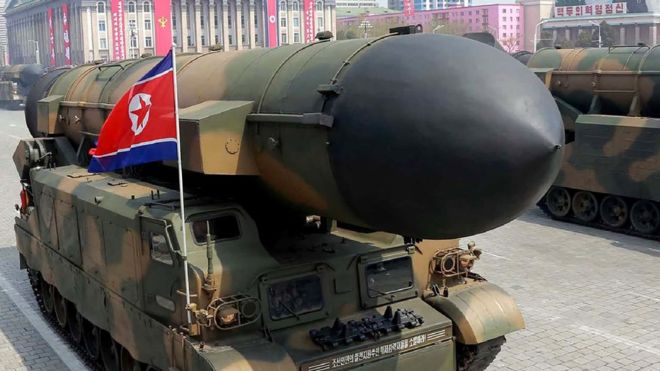 North Korea has lashed out at the US for continuing to call for the enforcement of sanctions.

The foreign ministry said there would be no moves towards denuclearisation if the US followed an “outdated script”.

It accused US negotiators of going against the intentions of President Donald Trump and the spirit of the summit in Singapore.

But the details of that process remain vague – North Korea did not commit to unilaterally give up its nuclear weapons and the UN says its nuclear programme is continuing.

The US has insisted that diplomatic and economic pressure must be maintained on the North until it stops all nuclear development.

North Korea’s foreign ministry said on Thursday: “As long as the US denies even the basic decorum for its dialogue partner and clings to the outdated acting script which the previous administrations have all tried and failed, one cannot expect any progress in the implementation of the joint statement including the denuclearisation.”

It is the latest criticism from North Korea since the historic meeting in Singapore, which had appeared to be the start of a thawing in the relationship between the old enemies.

Earlier this week, North Korea’s foreign minister called US actions “alarming”. And last month, North Korea accused the US of using “gangster-like” tactics in the negotiations.

The North’s foreign ministry also accused US officials of “going against the intention of President Trump” by “making baseless allegations against us and making desperate attempts at intensifying the international sanctions and pressure”.

It said “expecting any result, while insulting the dialogue partner” was “a foolish act that amounts to waiting to see a boiled egg hatch out”.

Top diplomats from the US have strongly criticised the North’s commitment to denuclearisation.

National security adviser John Bolton earlier this week said North Korea had not begun the progress, while US envoy to the UN, Nikki Haley, said Washington was “not willing to wait for too long” for the North.

Pyongyang’s Foreign Minister Ri Yong-ho is currently on a visit to Iran where President Hassan Rouhani warned the US could not be trusted after Tehran’s experience of having the Trump administration tear up an Obama-era deal to ease sanctions.

According to Iranian media, Mr Ri said his country would seek to retain its nuclear skills for when the US would revert to a more aggressive position against Pyongyang.

“Since we know that the US will never give up its hostile policy toward us, we will hold onto our nuclear knowledge,” he was quoted by local media.

N Korea: We won’t move on talks with Trump