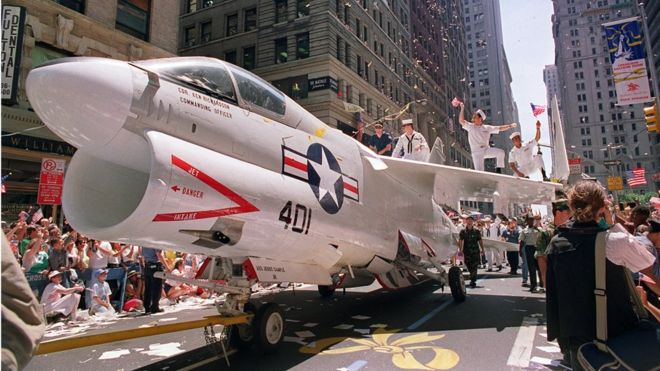 US defence officials have postponed a planned Veterans Day weekend military parade through the streets of Washington DC until at least 2019.

The parade was originally conceived to commemorate the centenary of the end of World War 1 and to honour veterans.

But a Pentagon official said it has now been delayed at least one year.

US President Donald Trump requested a parade after seeing France’s Bastille Day event in 2017 and expressing a desire to “top it”.

A Pentagon spokesperson, Colonel Rob Manning, said in a statement that the Department of Defence and the White House “have now agreed to explore opportunities in 2019”.

Earlier on Thursday, a US official told the AFP news agency the planning estimate for the event had ballooned to as much as $92m (£72m).

The parade’s budget director had offered an estimate of between $10m (£7.8m) and $30m (£23.6m) when the White House announced its request in February.

A memo at the time said no tanks would be used so as not to damage the roads of the nation’s capital.

The city’s governing District of Columbia Council was critical of the plan when announced, voicing its displeasure on Twitter.

Members of the Democratic party were similarly sceptical, with congressman Jim McGovern declaring it “an absurd waste of money” on Twitter and saying Mr Trump “acts more like dictator than president”.

The Pentagon said the parade was planned to travel from the White House to the Capitol, and would feature a “heavy air component at the end”.

It was planned to include “wheeled vehicles only”. The focus was to be on the work of US military veterans through the ages, starting with the American Revolutionary War.

US media pointed out that Donald Trump cancelled planned military exercises with South Korea in June after his meeting with North Korean leader Kim Jong-un on the grounds it would “save a fortune”.

We save a fortune by not doing war games, as long as we are negotiating in good faith – which both sides are!

The US had a military parade in 1991 following the end of its successful campaign to force Saddam Hussein’s troops out of Kuwait.

Some social media users questioned the purpose of the parade at all, and said instead the money should be used to directly help veterans.