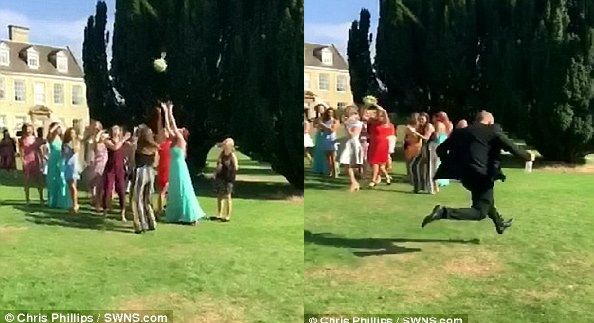 This is the hilarious moment a man does a runner after seeing his girlfriend catch a bride’s wedding bouquet.

The male guest was caught on camera running for his life after realising he might be next to get hitched.

Daniel Gilbert runs for the hills with a bottles in his hands as his girlfriend, Rachel Besley, rejoices with the bouquet.

The couple had been celebrating newly-weds Chelsea and Matt Best tied the knot in Kettering, Northampton last Saturday.

In line with tradition, Chelsea flings the flowers into the crowd towards a group of women who all have their eyes on the prize.

A dozen or so women reach out to grab hold of the bouquet before it lands. 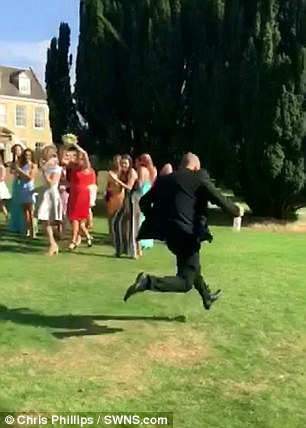 They can be seen barging each other out of the way to try and get hold of the bouquet before it’s caught by Rachel, who is wearing an orange gown.

Clearly overjoyed, Rachel jumps for joy holding the yellow flowers in the air until Daniel runs away.

Social media users commented on the now viral video saying their partners would react much the same.