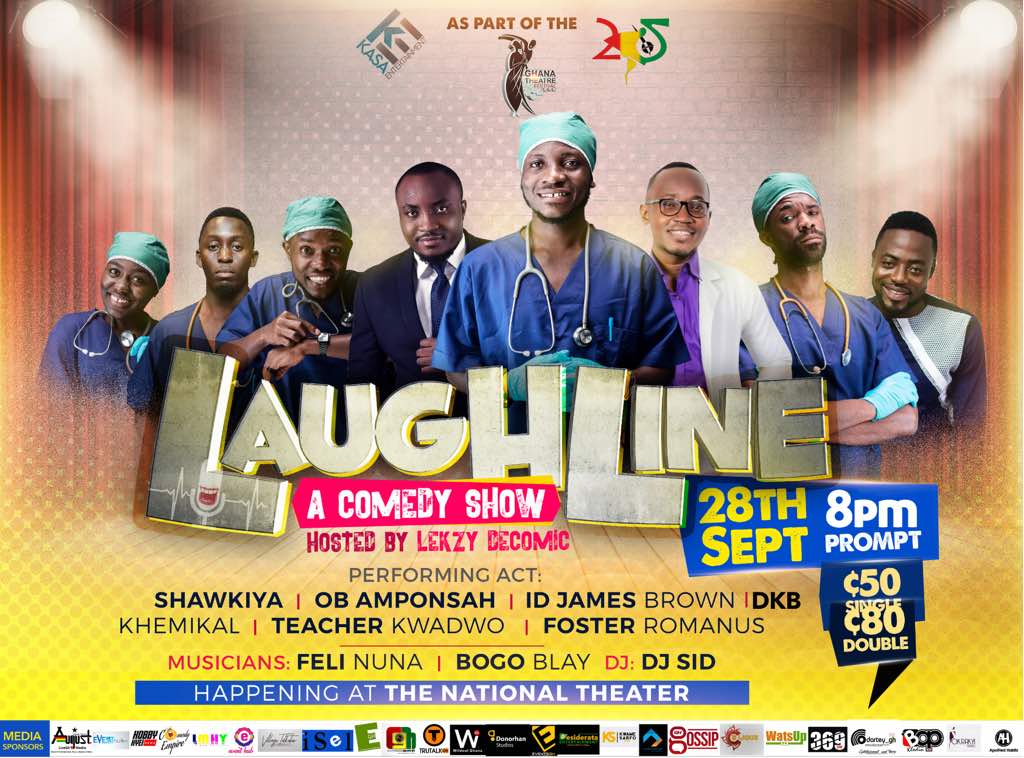 Kasa Entertainment, organizers of Laughline Comedy on September 28, 2018 host another exciting edition of the rib cracking show at the National Theatre.

The Laughline comedy show has seen an immense growth in the past few years; this show has also brought out amazing comedians.

LEKZY DECOMIC – your award winning Host, is no stranger to the spotlight. He has performed at various comedy platforms and will keep you laughing all night long!

DKB – He is a high-energy, crowd-pleasing comic with an in-your-face attitude and razor-sharp wit. With his ability to pick on trending issues and make jokes out of them. He promises patrons of laughline nothing but the best of jokes.

OB AMPONSAH: He has won the hearts of many by his relationship and sex jokes. OB having a medical background is able to exercise the ribs of his audience through his rib cracking jokes. Come September 28th; OB will be at his peak.

TEACHER KWADWO – His high energy and outrageous comedic face is widely accepted by diverse audience. With his online presence and stage craft he’s been referred to by his peers as one of the funniest acts to watch.

KHEMIKAL – Known for his keen observation skills, quick thinking and a loud mouth. Khemikal promises to cut a wide, dangerous path to put smiles on the faces of patrons. He’s performed on big platforms and Laughline will add up to his amazing performances on the evening.

ID JAMES BROWN – He cleverly delivers his life experiences and culture clashes with the western world. He is loved for his satirist jokes. Back from his European tour, he promises patrons nothing but the best from his camp.

FOSTER ROMANUS: – An act you can afford to miss on September 28th. The controversial comedian has a lot to deliver come September 28 thus urging his fans not miss the Laughline comedy show.

SHAWKIYA– The only lady amongst the guys promises to rock the ribs of the audience. She is noted for her ability to split the crowd with her humorous jokes.

Amidst the comedians cracking jokes, in house DJ, DJ SiD will be rocking the crowd with back to back hitz. The comedy show will feature music acts; Feli Nuna and Bogo Blay.

Laughline is a Kasa Entertainment Initiative in partnership with the National Theatre.

COVID-19: It may take years for audience to feel comfortable going out for shows – DKB

NO MORE BEEF: David Oscar and DKB reunite at LOVE and LAUGHTER Show