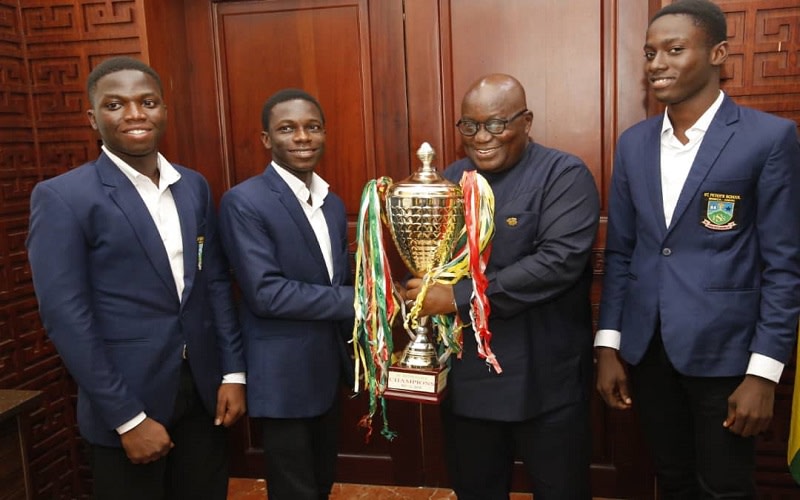 Winners of the 2018 edition of the National Science and Maths Quiz (NSMQ), have beseeched the President, Nana Addo Dankwa Akufo Addo, to as a matter of urgency, provide resources to the country’s science-focused secondary schools to make the teaching of the sciences more practical as compared to its current theoretical nature.

The three contestants Oteng Kwadwo Frimpong, Fenny Benjamin and Kissi Annoh Kwaku, made the appeal at the Jubilee House when they paid a courtesy call on the President, led by school authorities of the St. Peters Senior High School.

Speaking on behalf of the three students, Kissi Annoh Kwaku, said a trip to the European state of Portugal where they encountered other science students clearly showed their theoretical advantage over their Portuguese colleagues where as the practical advantage over them by their Portuguese colleagues was obvious because of the practical resources available for teaching and learning in Portugal.

President Akufo Addo in his response to the submissions of the contestants assured that his administration welcomes the observation of the NSMQ winners and that everything that needs to be done to improve the teaching and learning of the sciences in Ghana will be provided by his administration.

The President added that if need be, education officials in the country will be invited to consider the reformation of the country’s science education model.

St Peter’s Senior High School on the 5th of July, 2018, emerged winners of the National Science and Mathematics Quiz after beating West Africa Senior High School and Adisadel College, in the 2018 edition of the competition. The Nkwatia-based school emerged as the winner after thrashing WASS with just a single point. At the end of the final round, St Peter’s had 45 points, WASS 44 points and ADISCO losing with 39 points.

These three schools rose above over 400 schools to claim a place in the final to battle it out for the bragging right. St. Peter’s SHS overcame its compatriots from the Volta Region; Mawuli School and Keta SHTS, in the semi its fourth consecutive appearance in the National Science & Maths Quiz final after beating local rivals, Mfantsipim School, and Ghana National College. West Africa SHS knocked out defending champions, Prempeh College in the semifinal contest.

The National Science and Maths Quiz

The National Science and Maths Quiz is an annual science and mathematics based national level quiz competition for senior high schools in Ghana. It has been produced by Primetime Limited, an advertising and public relations agency with an interest in education, since 1993.

The objective of the National Science & Maths Quiz has been to promote the study of the sciences and mathematics, help students develop quick thinking and a probing and scientific mind about the things around them, while fostering healthy academic rivalry among senior high schools.

The quiz, popularly referred to as “brilla” by many who have gone through the secondary school system is by far one of the few academic events that bring all of Ghana’s secondary schools together. The schools and students alike look forward to it. The National Science and Maths Quiz is the longest running educational programme on a Ghanaian television. It is broadcasted on GTV every Saturday at 11am and Wednesdays at 4pm.