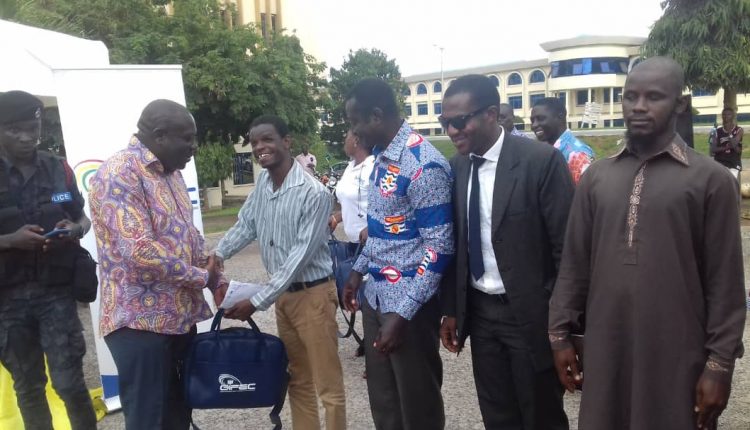 The Ghana Investment Fund for Electronic Communication (GIFEC) under the Ministry of Communications has donated 30 laptops to students with special needs at the University of Cape Coast.

The laptops which have been installed with Non-Visual Desktop Access (NVDA) software are meant to replace the use of braille which mostly delays students in their quest to accomplish academic tasks.

Aside from the laptops, GIFEC also donated 10 desktop computers and accessories to the ICT laboratory of the Persons With Disabilities (PWDs) at the university to support other academic activities.

Speaking at a ceremony at the University of Cape Coast to handover the computers, the Executive Director of GIFEC, Mr. Kofi Asante indicated that the donation forms part of the organization’s objective of bridging the digital divide and providing resources for capacity building in Information Communication Technology (ICT) and meeting the device needs of underserved and unserved populations, especially PWDs in Ghana.

He added that GIFEC is committed to partnering all educational institutions to build the ICT capacities of PWDs in the country so that not only will they be able to compete favourably in the job market, but also make their studies less stressful through the reduction of their dependence on braille materials for the visually impaired also to have easy access to a pool of resources to support their studies .

The Deputy Minister of Communications, Vincent Sowah Odotei, also pledged government’s commitment in rolling out more initiatives to support the education of PWDs and persons with special needs in the country.

He indicated that the ministry has, for instance, rolled out the GIFEC Special Digital Literacy Programme (SDLP) which is aimed at modernizing, improving and resourcing special training schools to effectively serve the needs of PWDs in the country.

“This assistive technology which translates visual information into forms which are useful to users via non-visual means such as text to speech, sound icons or braille device,” he said.

The President of the Association of Students with Disabilities (ASD), Caruthers Tetteh expressed appreciation to GIFEC and the Ministry of Communication for their kind gesture, noting the computers will go a long way to enhance their academic work especially the unique features that the laptops have over the traditional braille.

Tetteh, who is a visually impaired final year law student, also called on the government to roll out more policies to address the plight of PWDs in the country, especially students in the area of mobility.