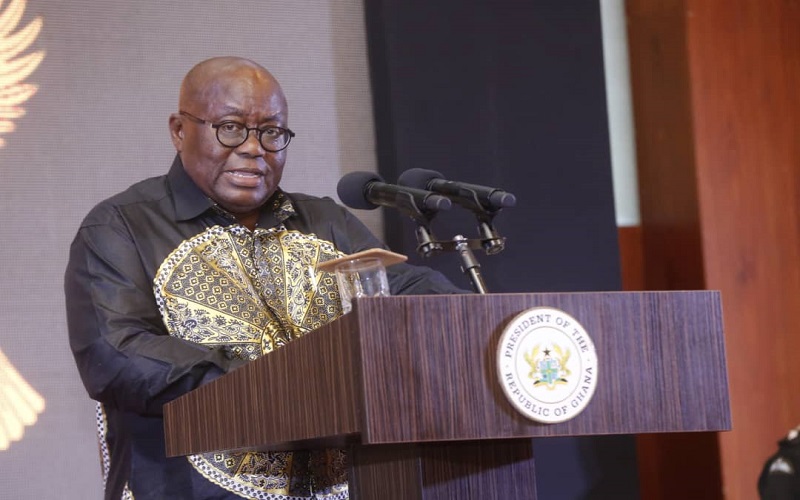 The President of the Republic, Nana Addo Dankwa Akufo-Addo, says the “concept of deterrence must be an important part of sentencing policy, especially in areas of great social concern, such as the fight against galamsey and vigilantism.”

Whilst recognizing the dictates of due process and the protection of human rights, President Akufo-Addo indicated that even though sentences are meted out in accordance with the Criminal Offences Act, there are discretionary powers that are given a the judge within a certain band.

“It continues to be a source of worry that persons, for instance, caught in the act of destroying our environment and polluting our water bodies, the very inheritance of our future generations, because of the phenomenon of illegal mining, popularly referred to as galamsey, get away with lenient sentences,” the President said.

He continued, “The media landscape is replete with accounts of persons who steal goats, for example, receiving sentences of not less than two years in prison. Yes, the sentences. I suggest that, in certain cases, the discretion must be exercised for the upper end of the band, i.e. for the maximum.”

President Akufo-Addo made this known on Wednesday, 2018, when he swore into office four new Supreme Court Judges, at a ceremony held at Jubilee House, the seat of the nation’s presidency.

Congratulating the newly sworn Justices, President Akufo-Addo indicated that they have met the stringent requirements of Article 128(4) of the Constitution, adding that “you have the independence of spirit, proven integrity, high moral character, and impartiality of mind to hold this high office. Your appointments are truly well-deserved and merited.”

With the Constitution decreeing the final judicial power of the State rests with the Judiciary, and not in any other arm of Government or agency of State, the President noted that central to the execution of the functions of the Judiciary is the Supreme Court.

He bemoaned the situation where judges proffer judgements on the basis of decisions from lower courts and cite them as law, describing them as unacceptable.

“Judges, more so Justices of the Supreme Court, must be learned, know their case law and ensure their decisions and judgements are properly motivated,” he added.

Broad Outlook on Appointments to the Bench

President Akufo-Addo noted that, as Attorney General, from 2001 to 2003, under the Government of His Excellency John Agyekum Kufuor, 2nd President of the 4th Republic, he had the honour of nominating for appointment onto the Supreme Court, with the approval of the President, distinguished jurists and academics.

“I have continued in this tradition as President of the Republic, and, today, the immediate past President of the Ghana Bar Association, a distinguished practitioner, Nene Amegatcher, and the former Dean of the Faculty of Law, University of Ghana, Professor Emmanuel Nii Ashie Kotey, have been appointed from the Bar directly onto the Supreme Court, together with two respected Judges of the Court of Appeal.,” he added

This blend of persons on the Supreme Court, in his view, “will strengthen the development of our nation’s constitutional and other jurisprudence.”