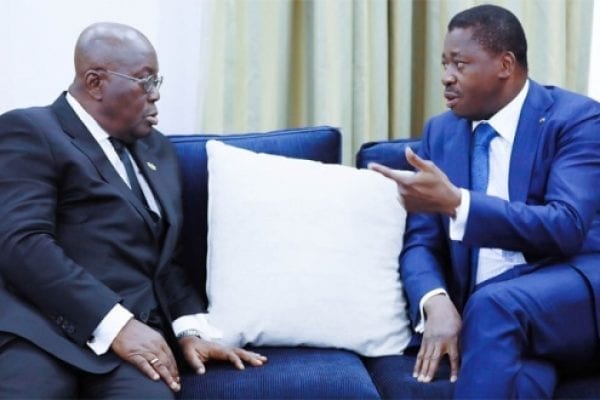 President of the Republic of Togo, Faure Gnassingbé on Sunday, 25th of November 2018, held talks with President Akufo Addo on developments in Togo after the last peace mediation meeting between the ECOWAS mediation team, the Government and the Opposition parties in Togo.

President Akufo Addo at about 7:15pm received the Togolese leader at the Jubilee Lounge of the Kotoka International Airport. The two leaders subsequently moved camp to the Australia House where they addressed the media briefly and moved into a closed door meeting.

On the 27th of June this year, President Akufo Addo and his colleague Guinean President, Alpha Conde, who have both been appointed by ECOWAS to facilitate peace talks in Togo, threw a challenge to the Government and the coalition of Opposition Parties in Togo to table their major pre-occupations about the political crisis in their country by specifying their main concerns in order to guide their mediation efforts going forward.

Addressing a plenary session of both parties at the Presidential Auditorium of the Hotel 2 Fevrier in the Togolese capital, Lome, the President said three months since the last meeting of the parties, things seem to have gotten worse than it was before the mediation efforts begun. To that end, the ECOWAS mediation team has decided to chart the path that has been proposed.

The two Heads of State decided to first meet with the Togolese government delegation to know their concerns. They subsequently meet with the Togolese opposition delegation to know their issues. Both parties then met for a final sessions to adopt a common communique on the main issues that would be set out for mediation. After the joint meeting, President Akufo Addo and President Alpha Conde addressed a press conference to announce the agreed issues and the way forward.

With the Togolese leader making a quick visit to bring President Akufo Addo up to speed on developments in Togo, it is likely that the Opposition coalition in Togo will follow suit to pave way for the two man ECOWAS mediation team to resume work. President Faure Gnassingbé has since depart Ghana back to Togo