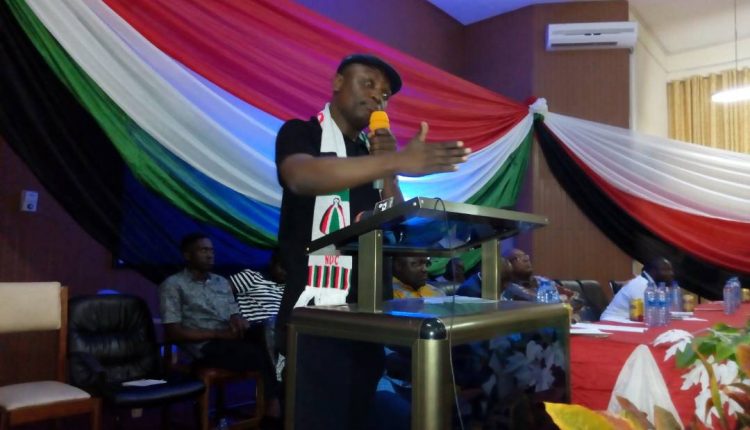 The opposition National Democratic Congress(NDC) has accused President Akufo-Addo of deliberately setting what it described as “bogus investigations” into several corruption scandals that has hit his government calculated to bring no meaningful outcome from such cases.

This follows the President’s claim at the African Investment Forum 2018 in South Africa a few days ago, saying “so far investigations[ involving his appointees] have not yielded any serious evidence.”

A statement signed by the NDC’s National Organiser, Kofi Adams, however, debunked such claims, insisting corruption allegations against government appointees had ostensibly been dismissed due to the President’s alleged desire to “hide the facts and provide a smokescreen behind which the offending appointees can be whitewashed, and the issues swept under the carpet.”

The statement added: “We find the President’s claims deceitful and breath-taking, in the level of disrespect that he has shown to Ghanaians who have been witnesses to massive cover ups, staged to conceal clear cases of corruption in his government. While it is true that he has unilaterally cleared his appointees in several cases of corruption, it has not been for want of evidence but rather due to a desire to protect his government. These comments also go to underscore the President’s preference for defending the corrupt acts of his appointees over punishment of same.”

Below is the statement from the NDC

The National Democratic Congress (NDC) is astonished by yet another robust defense of and support for corruption by President Akufo-Addo in faraway South Africa. The President is quoted as saying that, all instances of corruption under his watch have been investigated and his appointees cleared because no evidence was found.

We find the President’s claims deceitful and breath-taking, in the level of disrespect that he has shown to Ghanaians who have been witnesses to massive cover ups, staged to conceal clear cases of corruption in his government.

While it is true that he has unilaterally cleared his appointees in several cases of corruption, it has not been for want of evidence but rather due to a desire to protect his government. These comments also go to underscore the President’s preference for defending the corrupt acts of his appointees over punishment of same.

The President set the ball rolling by opening up the public purse for scramble through the appointment of an inordinately large number of Ministers.

He believes that a country of such limited means and resources as Ghana, deserves 111 Ministers, some of whom occupy ridiculous portfolios and are only duplicating the work of traditional Ministries and Public Agencies.

Also, he added one thousand (1,000) Presidential Staffers, many of whom have no clearly defined roles and constitute a drain on the national purse.

He has also wholeheartedly embraced nepotism on a scale never witnessed in Ghana’s history; because scores of his family, friends and business associates of his relatives have been given plum appointments and placed in strategic positions to facilitate unprecedented levels of conflict of interest and insider dealings.

Following from this, President Akufo-Addo and his appointees have subjected the national purse to systematic assault and abuse. The President’s usual response has often been to put in place bogus investigations that are designed from the onset to hide the facts and provide a smokescreen behind which the offending appointees can be whitewashed, and the issues swept under the carpet.

For the benefit of President Akufo-Addo, in the event that he is genuinely unaware that his actions have served to promote corruption, but not to combat it, we list a few of the legion of corruption cases that he has covered up.

After giving Executive Approval for the fraudulent US$1 billion AMERI Novation deal, it was claimed that President Akufo-Addo was misled into doing so. The fraudulent transaction would have ensured that instead of seeing out the original deal in two years or paying about US$300 million to own the plant, Ghana would have paid another US$800 million to shady characters over a 15-¬?year period. President Akufo-Addo failed to take responsibility for this scandal. No investigation has been conducted into this matter to ascertain how and who conspired to dupe the state to such a colossal tune.

Also, after it emerged that the then Managing Director of BOST had violated procurement laws and the NPA Act to give 5 million litres of contaminated fuel to unregistered and unlicensed entity’s, what did President Akufo-Addo do? He hurriedly and prematurely set aside the committee set up by then Energy Minister to look into the scandal, and presented a BNI report which sought to sweep the issues under the carpet despite glaring evidence of wrongdoing.

In addition, when it emerged that a staggering US$100, 000 had been demanded by the Trade Ministry in exchange for each seating space around President Akufo¬-Addo at an award ceremony, he dismissed the Parliamentary inquiry being carried out into the matter even before the findings could be submitted.

Taking a cue from this, Majority members on the committee compiled a sham of a report that sought to exonerate government officials who the evidence available showed were complicit in the ‘Cash for Seat Affair’.

This compelled Minority members of the Committee to issue a minority report to expose compelling evidence of wrong doing. Furthermore, President Akufo-Addo must understand that no credible Ghanaian believes the lie that, the international business community accepted to pay a whopping US$100,000 in order to sit by President Ashim Morton as the NPP would have us believe.

Once again, President Akufo-Addo claims that no evidence of wrong doing was found after investigations into the disgraceful visa racketeering scandal under which scores of Ghanaians were transported to Australia by posing as journalists when they were not. Despite the international disgrace Ghana suffered, President Akufo-Addo would have us believe that it was ghosts who procured the visas for those taken to Australia and not his appointees who were in charge of the whole arrangement. The report of the so-called investigations has not been made public; and we demand an immediate release of the report to the public.

Furthermore, after the Board of the Ghana Cylinder Manufacturing Company revealed various acts of corruption on the part of the CEO of the company, President Akufo-Addo rather dismissed the Board and left the CEO in place after a supposed investigation was conducted into the matter. The report of the investigation into the matter has also never been made public. Also, we demand that President Akufo-Addo makes this report public.

President Akufo-Addo took no remedial action against his cousin – Finance Minister, Ken Ofori Atta, despite multiple breaches of the procedures in the floatation of the US$2.25 billion Templeton bond. Even findings of conflict of interest against the Minister have gone unpunished by the President.

Finally, after it emerged that up to GHc 23 million worth of pre-¬mix fuel had been diverted with the full knowledge of the Minister for Fisheries and under the supervision of her brother who she made Administrator of the Pre-mix Secretariat, President Akufo-Addo turned a blind eye and kept the Minister in office with no concrete action to either punish her or hold anyone responsible.

The instances of corruption cited above, clearly belie the President’s claim that he has conducted credible investigations into the myriad of corruption cases he has presided over in his Family and Friends government.

President Akufo¬-Addo has chosen to preserve his party and government interest over the national interest. He prioritizes defending corrupt appointees over defending the interest of the long-suffering tax payer.

The fight against the corruption epidemic under President Akufo-Addo must be taken seriously than the flippant approach he has adopted. His claim that all instances of corruption under his watch have been investigated and his appointees cleared because no evidence was found is deception.