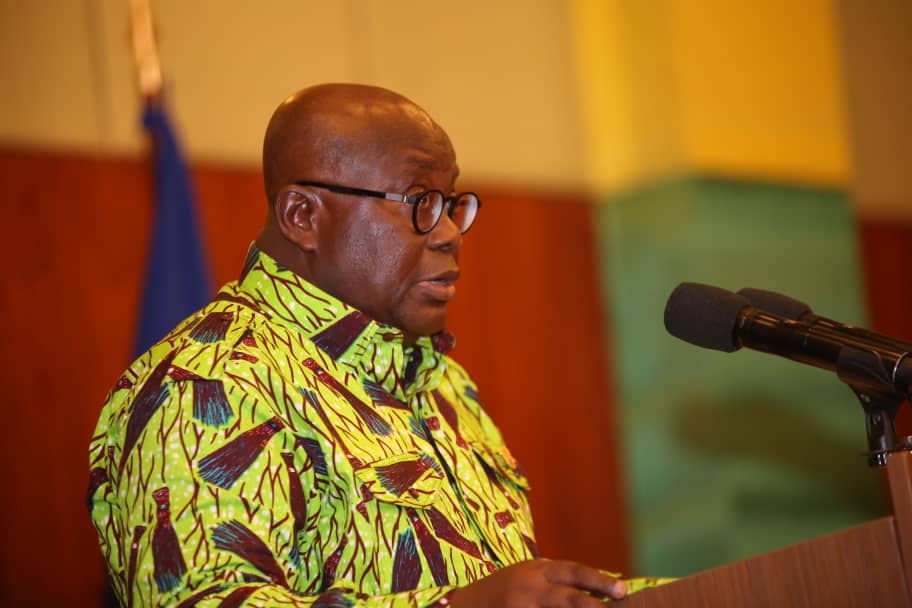 President of the Republic, Nana Addo Dankwa Akufo Addo has made a passionate appeal to the Abudu and Andani families of Dagbon to embrace the progress Report of the Committee of Eminent Eminent Chiefs chaired by the Asantehene, Otumfuo Osei Tutu II and two others, Nayiri, Nana Bohogu Abdulai Mahami Sheriga and Yarn nwura, Tuntumba Boresa Sulemana Jakpa I, that has set out a road map for the restoration of peace in the Dagbon traditional area.

Addressing the three Eminent Chiefs and members of the Abudu and Andani gates at a ceremony at the Banquet Hall of the Jubilee House to receive the report of the Committee of Eminent Chiefs, President Akufo Addo urged both parties in Dagbon as an expression of love for their people to rise above the passions that has fueled the crisis in Dagbon and support the implementation of the new road map.

“The overwhelming majority of the people of Dagbon especially the youth are tired f this age old conflict and just want the opportunity to enhance their lives in normalcy and security” the President said.

In his address at the ceremony, the Asantehene, Otumfuo Osei Tutu II, he and his two colleague eminent chiefs have after nearly sixteen years found a road map to resolving the Dagbon chieftaincy dispute, which has seen the two feuding royal gates, Abudu and Andani, travelling to the Manhyia Palace in Kumasi for mediation for over a decade now. Representatives of the two feuding parties according to the Asantehene, Otumfuo Osei Tutu, have gladly accepted the peace deal brokered by him and his fellow eminent chiefs. The Asantehene indicated that per the new arrangement, both parties have reached a compromise regarding the separate holding of the funeral rites of two late Dagbon Kings from both the Abudu and Andani Gates.

The peace deal according to the Asantehene will see the Abudus giving access to the Gbewa Palace to perform the final funeral rites of the late Ya Na Mahamadu Abdulai, according to their customs and traditions. The funeral rites, which are expected to last for two weeks, would commence on December 14 and end on December 28, 2018, after which the Abudus would leave the Gbewa Palace peacefully.

State Support for the Peace of Dagbon

President Akufo Addo in his address indicated that “government will provide the requisite financial, material, moral, physical and security forces necessary for the sustain of the peace process that has been embarked on today”.

“Even though government has already spend a huge amount of money and resources to maintain peace in Yendi this last sixteen years, government will not relent in its determination to help foster again peace and unity in Dagbon” the President said.

On the issues of government’s involvement and interest in the Dagbon crisis, President Akufo Addo states unequivocally that he has no interest whatsoever in the situation and on who becomes the next Ya Na of Dagbon. His interest is to ensure the peace and development of the Dagbon traditional area.

“As I have said on many occandidateI am not a Dagomba, and I therefore cannon t be an Andani or Abudu. I have no candidate for the office of Ya Na, that is a matter for the People of Dagbon. I am just an ordinary Ghanaian who wants to see the peace, progress and prosperity of all parts of our beautiful country without any discrimination or differentiation” the President said.

The Kingdom of Dagbon

The Kingdom of Dagbon is a traditional kingdom in northern Ghana founded by the Dagomba people in the 15th century. During its independence, it comprised, at various points, the Northern, Upper West and Upper East regions of present-day Ghana. Since Ghana’s independence in 1957, the kingdom has been limited to a traditional, customary role. 1888 the Kingdom of Dagbon was partitioned between the German and British empires, and in 1899 this split became organised into the territories of German Togoland and the Gold Coast. Following World War I, eastern Dagbon became part of British Togoland. The Gold Coast achieved independence in 1957 as Ghana.

The Kingdom of Dagbon since around the 1920s has been characterised by repeated succession disputes and conflict, especially revolving around its relationship with the Konkomba people. Several incidents of violence have occurred, including in 2002 when the King of Dagbon Yakubu Andani II, of the Andani royal family, was murdered by supporters of the Abudu royal family. As of January 2014, a regent (installed in 2006) has acted as sovereign of the kingdom until a new ruler is chosen.[3] Today, the king of Dagbon’s court remains at the city of Yendi. The kingdom is divided into territorial chiefdoms, categorised from divisional to village chieftaincies. The monarch of Dagbon is known as the Ya Naa

NDC to petition UN for revocation of Akufo Addo’s appointment

Dec Polls will be conducted in good atmosphere – Akufo-Addo assures