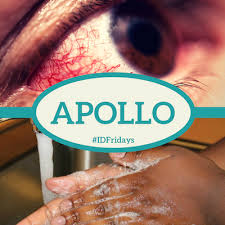 A new surge of the contagious viral eye disease known as “apollo” or Hemorrhagic Conjunctivitis has been confirmed by doctors at the Tamale Central Hospital in the Northern regional capital.

Apollo is an infection caused by the Coxsackie virus and presents with painful swollen red eyes, with purulent discharges and headache, and affects the lining of the eyelids and eyeball. It usually affects both eyes but may affect one eye and later spread to the other.

The disease affects people of all ages particularly those in crowded living conditions (that is homes, schools, day care centres, work places) and those who engage in poor hand washing practices.

Apollo is spread by contact with the hands, towels, face cloths, goggles and other surfaces exposed to secretions that contain the virus.

The symptoms of Apollo include sore eyes, feeling of grittiness or burning, redness, watery discharge, swelling of eyelids and light sensitivity.

The disease has damaged eyes of many people since its last outbreak seven years ago in the country.

A report of the outbreak has been issued by the Senior Optometrist of the hospital, Dr. Daniel Opoku, to the National Health Directorate in the region.

The report said the hospital had received an increasing cases of the disease since last month, without specifying a figure.

The statement also confirms some of the hospital staff have been affected in the outbreak and have been asked to visit the eye clinic for treatment.

The hospital staff have been cautioned to be careful in their contact with patients and their folders.  The staff have also been advised to practice proper hand hygiene to avoid being avoided.

The Ophthalmological Society of Ghana (OSG) in the region has not commented on the report and there have not been any from the Red Cross Society.

The Regional Health Service has confirmed the report but said the situation is being contained.