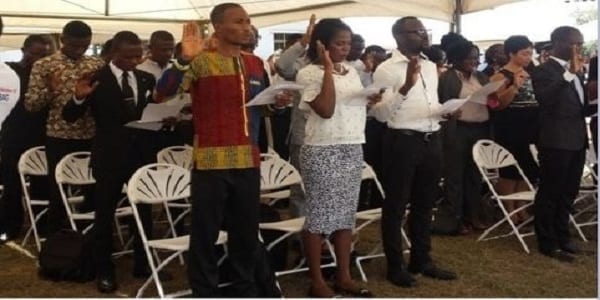 Justice Sophia A.B Akufo, the Chief Justice, who gave the advice, said: “The Republic, in whose name you would work, requires accurate and reliable information and your task is to make sure this exercise provides that.”

The Chief Justice was administering the Oath of Secrecy and Office to the officers in Accra recruited to work in the Southern Sector: Greater Accra, Volta, Western, Central and Eastern regions.

“You cannot administer, take, conspire or condone in any such unlawful oath affirmations or affidavit,” the Chief Justice said, adding that they should justify the trust the Judicial Service and the National Identification Authority had reposed in them.

Justice Akufo said they had qualified morally and academically for the task ahead, thus, they should give meaning to those qualities in the performance of their duties.

She explained that Ghana had embarked on a comprehensive programme to provide definitive identification to all citizens and persons legally residing in the country.

They would be overseeing the swearing for oaths and making of affirmations by persons who did not have the requisite documents to establish their citizenship status in the on-going National Identification exercise.

“This means that the integrity of the citizenship exercise lie, to a significant extent, in your hands,” Justice Akuffo told the commissioners.

Therefore compromising on any of them would be in violation of the Constitution or any Statute, such as the Statutory Declaration Act of 1971 and the Citizenship Act, she said.

“When you are in violation or found guilty, it is an offence punishable by the laws of Ghana.

“Willfully certifying false statements or documents or intentionally deceiving, concealing or withholding any facts of documents pursuant to the swearing of an Act is a misdemeanour punishable under Section 191 of the Criminal Offences Act,” she stated.

She advised them not to swear-in anyone that they had not seen in person or whose claim they cannot verify.

She asked them to pay particular attention to the instructions received on the role and liabilities of Commissioners for Oath to serve as a guide in the discharge of their duties.

Justice Akufo advised them to be guided by Zachariah 8:17 “Let none of you imagine evil in your heart against his neighbour and love no false oath for all these are things that I hate – says the LORD.”

“Be firm but fair, accommodating but faithful to the law. Don’t compromise your training and integrity by allowing any infractions on your part.”

She called on the NIA to sensitise the other commissioners on the Citizenship Act as they were also a valuable force, so that they can function effectively and help in the exercise.

Professor Ken Attafuah, the Acting Executive Secretary of NIA, commended the Chief Justice for her sterling leadership under which 1,031 commissioners for oath had been trained by the JTI including those in Ashanti and Northern regions.

He expressed worry that only a third of Ghanaians were documented as they had birth certificates and passports, saying, the mass registration would enable majority of Ghanaians who did not have any form of identification to be captured in Ghana’s data for socio-economic development.

Professor Attafuah cautioned against registering foreigners and advised them not to be confrontational with those they suspect are not citizens but refer them to the appropriate quarters.

He charged the commissioners to give nothing but the best of services in the all important national exercise.

Ms Cynthia Pamela A. Addo, the Judicial Secretary, said the success of the process depended on the commissioners and they should not fail the State.

Madam Yaa Yacobu, the Public Relations Officer for the Ghana Bar Association, advised them to be diligent, committed and be weary of those that would make them compromise on their integrity.

All the 731 commissioners for oath were presented with certificates after the training. – GNA