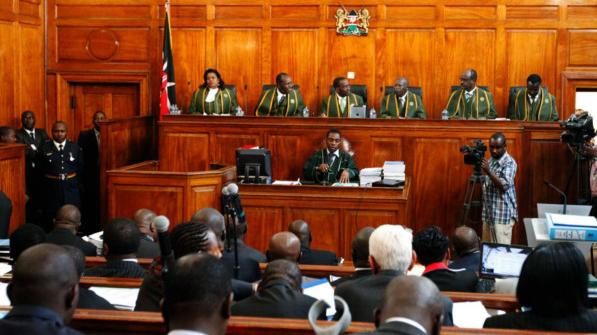 Kenyan politicians must pass a bill that would ensure women one-third of seats in parliament – or risk plunging the country into a constitutional crisis, MPs supporting the bill warned on Tuesday.

Despite Kenya’s 2010 constitution stating that no more than two-thirds of any elected or appointed body can be of the same gender, women hold 22 percent of seats in the country’s lower house of parliament, and 31 percent in the upper house.

Court rulings since 2012 have directed parliament to pass legislation to enforce the gender rule or risk being dissolved – but previous attempts have failed with female MPs accusing male lawmakers of deliberately blocking efforts.

If parliament is dissolved, a general election would need to be called. Kenya held a controversial, highly polarised and violent election last year.

Amid increased scrutiny from the courts, Kenya’s lower house is expected to vote on a bill on Wednesday.

“The truth is we, as parliament, are unconstitutional,” said Rozaah Buyu, a representative for the western region of Kisumu. “What authority do we have to bring others to account when we are not acting within the constitution by disregarding the gender rule?”

The high court in 2017 stated the chief justice can be petitioned to advise the president to dissolve parliament if a law was not enacted, said Buyu, who is vice-president of the Kenya Women Parliamentary Association.

TIME TO BE COUNTED

Kenya’s economy has grown on average by 5 percent annually over the last decade, but the benefits have not been equally shared. Women and girls remain disadvantaged socially, economically and politically.

Women make up only a third of the 2.5 million people employed in the formal sector, says the Kenya National Bureau of Statistics. And while women provide 80 percent of Kenya’s farm labour, they own 1 percent of agricultural land.

The percentage of women in Kenya’s parliament is lower than its east African neighbours such as Ethiopia, South Sudan, Burundi and Rwanda, according to the Inter-Parliamentary Union.

Gender experts say women in politics around the world face a barrage of challenges – from physical and sexual violence to a lack of money to fund their campaigns. Quotas, they say, help create a more level playing field and ensure their voice is represented.

The bill, which was introduced in parliament last week, provides for special seats to be created if elections fail to achieve the required numbers, with candidates from the under-represented gender nominated to fill them.

Backed by President Uhuru Kenyatta and opposition leader Raila Odinga, many MPs have voiced support for the bill, citing recent moves in Ethiopia where half the cabinet, the election chief, head of the supreme court and the president are women.

But the bill faces stiff resistance.

Previous attempts to vote on a bill have flopped, largely due to quorum hitches where MPs have failed to be present, and there is a fear that this could happen again.

Positions, they add, will be given to mistresses of senior politicians or “slay queens” – a slang term used to describe a beautiful woman who only dates wealthy men – rather than based on merit.

One MP suggested women who are nominated for parliamentary seats undergo an “integrity test” where their childrens’ DNA be checked to ensure they are all of the same father.

Gender rights experts say this has fuelled public misconceptions about the bill – resulting in a debate which has been dominated by sexism instead of facts.

“There is a misunderstanding by citizens that gender is women, and the bill is meant to favour women in political representation,” said Zebib Kavuma, head of U.N. Women in Kenya.

“This provision could be men or women like in the case of Rwanda where currently more men are nominated to achieve the threshold of two-thirds. Passing the gender rule is important for posterity. Men may need the law in some years to come.”

Male opponents have also argued that creating additional parliamentary seats would cost Kenyan taxpayers millions of dollars in extra salaries, but campaigners cite studies from the Institute of Economic Affairs which estimate the cost per person to be around six shillings ($.06) annually.

“All of these are just side shows of irrational patriarchy,” said Marilyn Kamuru, a prominent lawyer and gender rights commentator.

“Politicians are trying to rile up anti-women feeling as a basis to justify their voting no. That’s why they don’t want to have a discussion about the fact that this bill is a constitutional requirement.”