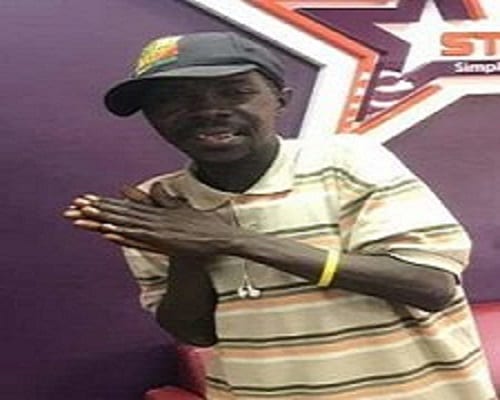 Hiplife artiste, Ekow Zagla popularly known as Baka Tee or Bak-Tye says his “grace to grass” experience is as a result of the overwhelming fame he got during his peak in his career, which he couldn’t manage well.

The ‘Yen Pie’ hit maker, narrating his experience to Giovanni Caleb on Starr drive Thursday said “I’ve been through a lot and I think when you become a star you go through a lot of issues”.

According to him, he was hit by some unforeseen life changing circumstances which affected his life and career massively.

Bak Tye in the early part of the 2000’s was one of the fast rising artiste the music industry got. He was virtually booked for performance on every show in Ghana, making a lot of money.

When he was asked what led to his downfall, he said “A lot of issues boss. People think where is Bak-Tye? Some people say Bak Tye is crazy, Bak Tye is this, Bak Tye is that but no it is not like that. Bad company and bad business.”

He added that: “Sometimes when you become a star, you know it will get into your head, you get carried away and then if you don’t take care…..but you have to be careful when you are at the top because everyone is looking up to you”.

He however rejected claims that, his current status in life is as a result of drugs.

Bak Tye shot to fame in the early 2000’s, with the likes of Batman now Samini, Mzbel, Kokoveli, Tinny among a host of others, but the talent suddenly took a nosedive in his career and now  have bad times.

Watch the video below

Spent sometime with BAK TYE (Baka Tee) one of the early super stars of the HIPLIFE music genre. Back in the 2000s he used to command the streets with his freestyles and rap flow. Got songs with SAMINI (Batman then), CASTRO, KWAW KESE, MZBEL, KOFI NTI etc Fast forward to today as I sit with the 38year old rapper (trying not to believe this age for obvious reasons) I asked him WHAT HAPPENED? he gave me the simple answer “No one stays on top forever. Life happened. ….. I need your support”. Not too sure how to feel. #StarrDrive Starr1035FM