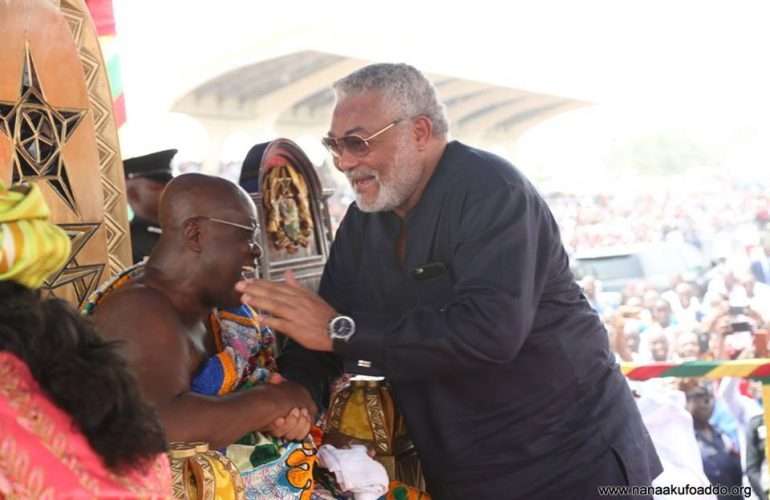 Former President John Agyekum Kufuor has said he’s not the least worried about the ”love affair’ between the ruling New Patriotic Party (NPP) and the founder of the opposition NDC and ex President, J.J Rawlings.

Many political watchers have been taken aback following what some have described as ‘flirting’ between Mr Rawlings and the NPP especially President Akufo Addo since the party assumed power in 2017.

Some members of the NDC including former Ashanti Regional Vice Chairman Alhaji Muhammad Sani accused former president Jerry John Rawlings of being ‘a paid agent of the New Patriotic Party.’ saying his actions show he is against the progress of the party he founded.

A founder member of the NPP, Dr. Nyaho Nyaho Tamakloe also had cause to complain about the cordial relationship that currently exists between Mr Rawlings and the NPP describing it as strange after what some NPP members went through in the hands of former President Rawlings after staging arguably the biggest political demonstration in the history of Ghana some 23 years ago.

But ex President Kufuor in an interview with Joy News stated that he is not surprised and finds nothing wrong with the relationship, adding that humans tend to change their minds and attitudes with time.

“We are human and the attribute of human is to change your mind from time to time, you don’t keep on knocking your head against a brick wall otherwise you’ll end up breaking your neck. So if now he’s enjoying cordiality so be it, it’s good.

Asked what’s the relationship between himself and Mr Rawlings, Ex President Kufour stated that he’s always made a conscious effort to accord his predecessor lots of respect due to the high office and has no ill-will towards him.

“Well, I want to always respect him after all he was former Head of State, in a way longest serving Head of State of this country and it’s not an easy place to be so I want to accord him due respect for that. But we end to have different views on different matters.I don’t not harbour any resentment towards him.”