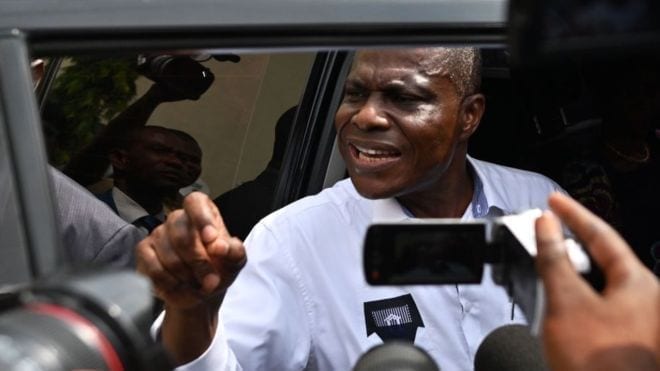 The African Union (AU) has called on the Democratic Republic of Congo (DR Congo) to postpone the announcement of its presidential election results.

The pan-African organisation, which aims to promote unity and democracy, says it has “serious doubts” about provisional results released last week.

Those figures gave opposition candidate Felix Tshisekedi victory but an opponent of the current administration, Martin Fayulu, insists he won.

The final results are due on Friday.

Questions have been raised about the accuracy of the results amid accusations that Mr Tshisekedi is planning a power-sharing deal with outgoing President Joseph Kabila.

A number of AU heads of state and government met in the Ethiopian capital, Addis Ababa, on Thursday and released a statement about the deeply disputed 30 December vote.

“There were serious doubts on the conformity of the provisional results, as proclaimed by the National Independent Electoral Commission, with the votes cast,” it read.

“Accordingly, the [AU] called for the suspension of the proclamation of the final results of the elections,” it added.

Mr Kabila has been in office for 18 years and the result, if confirmed, would create the first orderly transfer of power since independence from Belgium in 1960.

Mr Fayulu filed an appeal in the Constitutional Court on Saturday demanding a manual recount of votes.

A verdict is expected as early as Friday, and experts say there are three possible outcomes.

The court could confirm Mr Tshisekedi’s victory, order a recount, or scrap the results altogether and call fresh elections.

But the court has never overturned results before, and some think most of its judges are close to the ruling party.

What do others say?

The declaration of Mr Tshisekedi as winner has also been disputed by the influential Catholic Church which says it deployed 40,000 election monitors across the country.

International experts based in the US, and the French and German governments, have also raised doubts.

Meanwhile, the UN says ethnic violence in the west of the country left at least 890 people dead over just three days last month.

Clashes between Banunu and Batende communities took place in four villages in Yumbi between 16-18 December, according to the UN Human Rights Office.

Voting in the presidential election was postponed in Yumbi because of the violence.

Most of the area’s population has reportedly been displaced, including some 16,000 people who sought refuge by crossing the Congo river into neighbouring Republic of Congo, also known as Congo-Brazzaville.

Some 465 houses and buildings were burned down or pillaged, including two primary schools, a health centre, and the office of the country’s independent electoral commission, the UN said.