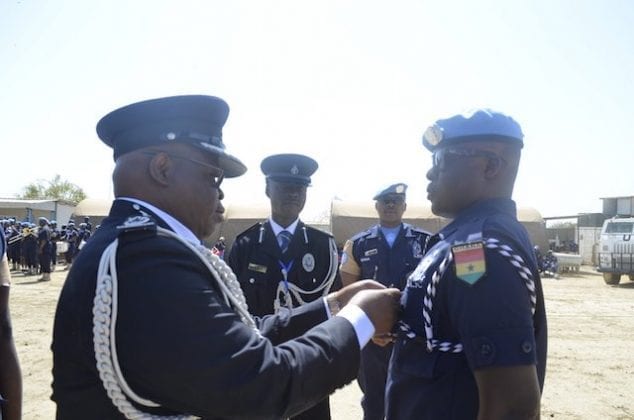 The United Nations has honored 165 officers of the Ghana Formed Police Unit (GHANFPU) who have been on United Nation Mission in South Sudan (UNMISS) for one year with medals.

The ceremony known as UN MEDAL DAY is organized every year to recognize the hard work of peace keepers who have ended their tenure and ready to return to their home countries.

A colourful parade was organized on Wednesday 19th December 2018, in the camp of GHANFPU based in Bentiu- South Sudan, where medals were awarded to deserving officers for their meritorious service to the UN

The Commanding Officer for GHANFPU, Chief Superintendent Mr. Christopher Klomegah was given a special medal accompanied with a citation for his visionary and leadership qualities which has culminated to the success story of the GHANFPU.

The special guest of honor for the occasion was the Deputy Inspector- General of Police, Mr James Oppong- Buonuh who assisted the reviewing officer and the Head of Field Office Mr. Girmay Gebrekidan to decorate the peacekeepers with UN Medals.

The occasion was also graced by the Head of Field office for UNMISS, Her Excellency Hiroko Hirahara. She expressed gratitude to the peacekeepers for their invaluable service to the UN by protecting internally displaced persons in South Sudan.

She also made a passionate appeal to the Government of Ghana and the Ghana Police Administration to increase the number of female police peace keepers at Bentiu- South Sudan because of the critical role they play by giving special protection to vulnerable people mainly women and children affected by the political instability in the country.

Speaking at the ceremony, the reviewing officer for the parade, Commissioner of police Mr. Girmay Gebrekidan, chief of staff of UNMISS, conveyed a special message from the UN secretary General to the Ghanaian peacekeepers. He commended them for their dedication, commitment and high level of professionalism exhibited throughout their period with UNMISS.

The Deputy Inspector-General of Police travelled to Bentui, South Sudan with a team of officers from the Police Headquarters.