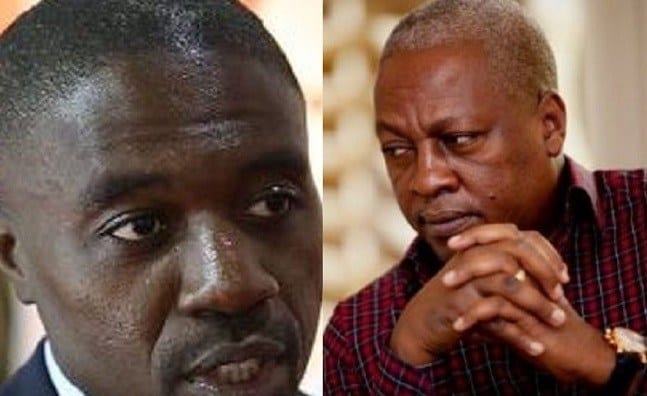 Ambassador Daniel Osei, former Ghana’s Consul to the United Arab Emirates (UAE) under former President John Dramani Mahama, has said his greatest mistake in his political life is the fact that he took an appointment from the ex-President.

According to the avowed critic of the ex-Head of State, the reasons for which Mr Mahama appointed him were at odds with his principles and he regrets taking up that appointment.

Ambassador Osei has strongly campaigned against Mr Mahama being re-elected the Flagbearer to lead the NDC into the crucial 2020 elections saying the latter lacks visionary thinking and competence to lead the country.

He’s stressed that delegates of the NDC will do the party a great disservice if they go to the polls on February 23, 2019, and vote to elect his former boss, adding that Mr Mahama must be rejected so as to prevent him from coming in to amass wealth much to the detriment of the country.

Speaking to host Kwaku Owusu Adjei on Anopa Kasapa on Kasapa FM Tuesday, Ambassador Osei revealed that ex-President Mahama and his government did everything possible in 2016 to stop him from returning to Ghana to campaign for the party.

“They did everything to stop me but I had to fight them and there’s an email trail of my conversations to come to Ghana, I could have just sat quietly somewhere but I came down to Ghana and contributed my quota toward pushing the party. I came down several months before the elections to campaign and in any constituency that I worked we won. So it’s not about the person.

He added: “When I was given the position and I went to UAE, I went there with the intention to serve my country and I did my best. Many countries don’t have embassies at Abu Dhabi so I began moves to ensure that Ghana establishes an Embassy at Abu Dhabi and also help them establish one in Ghana. I met with the Emirate Foreign Affairs representative in Dubai and set up a meeting in Abu Dhabi and they agreed to help us set up an embassy and also help us with funding to do it. I informed Mr Mahama about it and told him how important it will be for Ghana to have that embassy to foster strong relationship with the gulf country, but shockingly he told me that we’ll build the embassy ourself when we come back to power in 2017, and that we don’t need their help. I was sad and it shows clearly that, that was not his focus, his focus was not aspiring for greatness for the country. All Mahama knows is money, money, money. Let’s not elect him to lead the NDC again, we have better alternatives, leaders who are visionaries.”