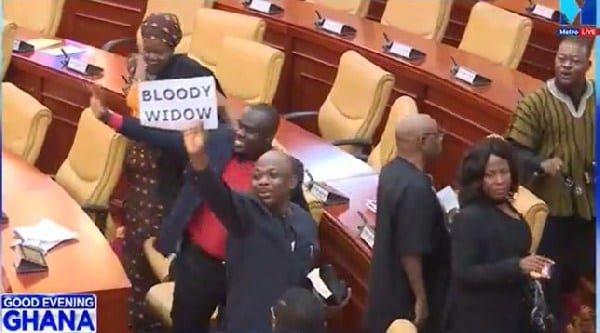 Minority Members of Parliament who held placards with the inscription “Bloody Widow” during the swearing in of the Ayawaso West Wuogon MP, Lydia Alhassan may be left off the hook as Parliament is unable to identify them.

The first deputy speaker of Parliament Joe Osei Owusu who presided over proceedings on February 6 directed the table office of Parliament to produce footage of proceedings to identify the MP’s for appropriate sanctions after the Minority leadership failed to apologize on behalf of its members.

The Deputy Majority Leader Sarah Adwoa Safo on Friday, told the House that the clerks and Table Office of Parliament have been unable to identify the MPs after reviewing the visuals of proceedings.

She added that Leadership is liaising with the Public Affairs Department to obtain the tapes from media houses to sanction the culprits.

“The information I’m picking up from the table and clerk’s office is that they have a tape but the identification of the specific members has been the challenge and the tapes has been presented to the first deputy speaker.

“I want to assure members that leadership will take the matter up. If parliament tapes are not as visible as they are being told from the public affairs directorate, I believe that day there were other media men in the chamber who might have recorded what happened.”

Some Minority MPs held the “Bloody Widow” placards in protest of the violence that characterized the by-election at the Ayawaso West Wuogon.

Their action was roundly condemned by a large section of the public.