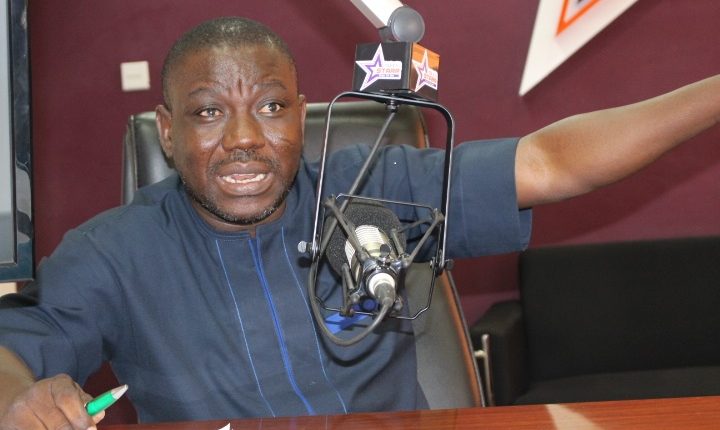 The Member of Parliament for Bolga Central, Isaac Adongo has said the Bank of Ghana(BoG) has done a disservice to its image by using faceless individuals to respond to his critical concerns raised on the economy last week.

Member of Parliament for Bolgatanga Central, Isaac Adongo was criticised by Dr. Robert Owusu-Gyekyi, an economist and banker for writing an open letter to the Governor of Bank of Ghana, Dr. Ernest Addison and disregarding basic standard processes available for legislators in that regard.

In a statement issued on Wednesday, Adongo who is also a member of the Finance Committee of Parliament said:”My attention has been drawn to a letter by one Dr Robert Owusu-Gyeki, self-described as an economist/banker, supposedly responding to the issues I raised in my letter of January 29, 2019, headlined ‘CONCEALMENT AND MANIPULATION OF ECONOMIC DATA,’ and addressed to the Governor of the Bank of Ghana, Dr Ernest Addison.

“Under normal circumstance, I would have allowed his politically-laced collection of words, inspired by theory rather than practice, to pass without a dignified response. However, I am compelled to respond for two main reasons:

“Neither the Bank of Ghana nor its Governor, who are the primary subjects of my letter, has yet responded; publicly or privately. Instead, you, a faceless person whose identity does not show up anywhere, appear to be holding brief for our Central Bank through a letter whose contents are as shallow as floods on a mountain.”

This comes on the heels of Adongo’s warnings in a letter dated January 29, 2019,  which he cautioned that the conduct of the Governor of the Bank of Ghana is bringing down the revered institution into serious credibility crisis on the back of the continuous manipulation of the Policy Rate that is not consistent with the fundamentals of the economy and concealing of critical economic data.

He added:”I want to urge you, Dr Robert Owusu-Gyekyi, to purge yourself of aiding and inspiring the Central Bank to manipulate economic data and provide fictitious Policy Rate cuts ostensibly to deceive investors.”

Below is the full statement by Adongo

IS BANK OF GHANA RESPONDING TO ME THROUGH A FACELESS OWUSU-GYEKI?

My attention has been drawn to a letter by one Dr Robert Owusu-Gyeki, self-described as an economist/banker, supposedly responding to the issues I raised in my letter of January 29, 2019, headlined ‘CONCEALMENT AND MANIPULATION OF ECONOMIC DATA,’ and addressed to the Governor of the Bank of Ghana, Dr Ernest Addison.

Under normal circumstance, I would have allowed his politically-laced collection of words, inspired by theory rather than practice, to pass without a dignified response. However, I am compelled to respond for two main reasons:

Having said that let me admit, conservatively, thatyou, the supposed Dr Robert Owusu-Gyekyi, displayed as well as expressed grave lack of understanding of the issues I raised in my letter. On that score, I am tempted to pardon you and instead, request that you humble yourself and submit to teachings so as not to blatantly expose yourself in subsequent encounters.

Before I proceed to expose the ignorance and blatant distortions in your letter, let me dare you to a public debate on the issues raised in my letter as and when you so wish. This will not only satisfy the public’s curiosity about who you truly are (that is if you indeed exist), it will help that same public to properly judge who among us understands the issues raised and is, therefore, not relying on textbook and third parties but using practical knowledge to discuss issues as critical and sensitive as those contained in my letter.

I wish to once and for all briefly draw your attention to the following issues;

While at it, please note that encumbered funds are funds that are restricted from usage because they have been set aside for a defined purpose. Thus, while proceeds of the Petroleum Holding Fund can count as part of Ghana’s gross international reserves (GIR), they cannot be part of NIR since they are not available for use by either the government or the Bank of Ghana until conditions for their usage are met. In fact, but for the absence of the Investment Advisory Committee (IAC), the Bank of Ghana would have had nothing to do with the Petroleum Holding Funds talk less of counting it as part of NIR, which is a collection of foreign currency resources that the Central Bank can use for monetary operation purposes as and when the need arises.

“(l) The amount in the Petroleum Holding Fund earmarked for transfer into the Ghana Petroleum Funds, shall not be used;

(f;) ascollateral for guarantees, commitments or other liabilities of any other entity.

(2) In order to preserve revenue streams from petroleum and ensure the object of this Act, there shall not be any borrowing against the petroleum reserves”

Clearly, what this means is that the Petroleum Holding Fund and the Ghana Petroleum Funds are neither available to the government nor the Bank of Ghana for use until provisions in the Act are satisfied. Instructively, those provisions include theexhaustion of 15 years from the date of the coming into force of the Act, which is 2011, and in the event of an emergency as clearly articulated in the Act.

Thus,it is totally false for one to claim that the Petroleum Fund are not encumbered funds and as such can be counted as NIR. Such a claim is not only informed by a position of ignorance, it falls flat in the face of the law That is why the Central Bank, having deceived the public and investors by counting the Petroleum Holding Fund as part of NIR, is now unable to respond directly to me on the matter but hiding behind you to further attempt to deceive the public.

If we were to go by your logic, it means that Ghanaians could wake up one day to news that the Bank of Ghana has liquidated the Ghana Petroleum Funds, comprising the Heritage and Stabilisation Funds to support the cedi from falling further. Such an act would not onlyhave been a gross violation of the law for which the Governor would have to answer for it, it would have also meant that the purpose for the two funds –future generations and safety against rainy days – would have been defeated with impunity.

Check the data published for end of 2018 and compare with the published data to end November 2018 and you will see lack of credibility, clear manipulation and inconsistency in the same data set churned by no mean an institution than the Central Bank of Ghana.

But as we speak today,Ghanais suffering huge uncovered auctions or shortfalls in Government Borrowing Program due to the unattractiveness of our interest rates. What this means in plain terms is that investors are running away from Government of Ghana bonds and securities. The results of the various borrowing results of Government in January 2019 are alarming. If this trend continuous, our reserves will deplete further as growing fears of excessive portfolio reversals heighten in 2019. Please see below the alarming numbers:

From the table above, whilegovernment was expecting to raise GH¢4.150 billion for January to meet its maturing debt obligation and finance the budget, investors were only willing to lend just GH¢1.355 billion. The huge shortfall or uncovered auction of GH¢2.795 billion adds to the pressure of the cedi because the foreign fund managers who bring the foreign currencies to participate in these auctions are running away. This means we are losing the opportunity that loans provide to build NIR. This also means that our capital account of BOP is already experiencing poor performance, right from the first month of the year.

Clearly, this shows that investors are running away from buying Government of Ghana bonds and securities due to the unattractive interest rates even at almost 20% for 2-year bonds. Yet, the BOG is cutting policy rate in a manner that will further aggravate the situation.These are practical issues that impact the capital account, government borrowing and building of reserves. So, instead of doing a theoretical review of BOP and discussing current account that is largely from services, review the impact of the disastrous policy rate cuts on the capital accounts and NIR.

For the sake of emphases, your theories of Current Account and its impact on BOP deficit were not the basis for analysing the impact of the Policy Rate on portfolio investment reversals and depletion of foreign reserves but you launched onto it, typical of a person aiming at a convenient route to escape. Sorry ‘Doc’.