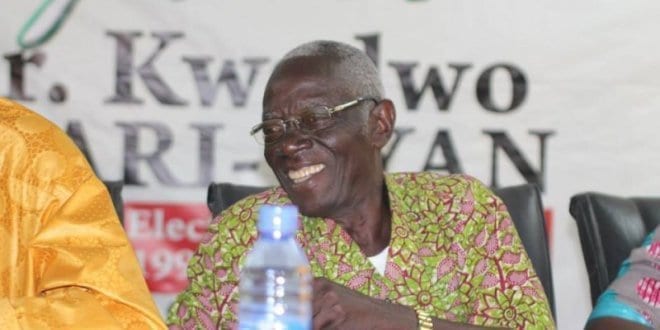 A former Minister for Communications under the erstwhile Mahama administration, Dr. Edward Omane Boamah  has questioned the composition of the members of the Justice Emile Short commission tasked by the President to probe the disturbances in the Ayawaso West Wuogon by-election.

According to him, adding former EC Chair, Dr. Kwadwo Afari Gyan to the mix of the other accomplished Lawyers would have been meaningful vis a vis the electoral issues at play in the incident to be investigated.

“My inquiry is about complementarity. This problem is about by elections. So, I think in this case, the services of an experienced member or former
member of the Electoral Commission in the person of Dr Kwadwo Afari Gyan would have been needed instead of compounding three legal brains on the Commission.” Mr Boamah wrote in a Press Release on the AWW violence.

Meanwhile, he believes the commission of  inquiry “will add very little to the compendium of available evidence” that flooded social media platforms.

“There has been a preponderance of credible evidence on social media. Also, traditional  media has been responsive by releasing their professional video footage to corroborate and  complement social media’s expose. Therefore, the natural questions are: Do we need a  commission of inquiry? And how come till date no arrest of the gun-toting men in brown  khaki has been made? he questioned.

His statement added:”…if the objective of the government is to delay and obstruct swift justice, then the anchor of this commission will not hold because it doesn’t matter how long it takes, Ghanaians will continue to keep this issue on the front burner. We must not allow  this to die. Lest we kiss our enviable democracy goodbye, because the issue bothers on the  safety of journalists, security officers, electoral officers, voters, bystanders and all others  who may be associated with future elections.”

The commission, established by the Vice President on Friday is to probe the shootings that occurred during the Ayawaso-West Wuogon by-election on January 31.

It is chaired by former CHRAJ boss, Justice Emile Short and has renowned law lecturer, Prof. Henrietta Bonsu as well as Patrick Acheampong as its members. Kofi Abotsi Of Ghana Institute of  Management and Public Administration (GIMPA) Law School is serving as its secretary.

I’ve not profited from being with Mahama – Omane Boamah