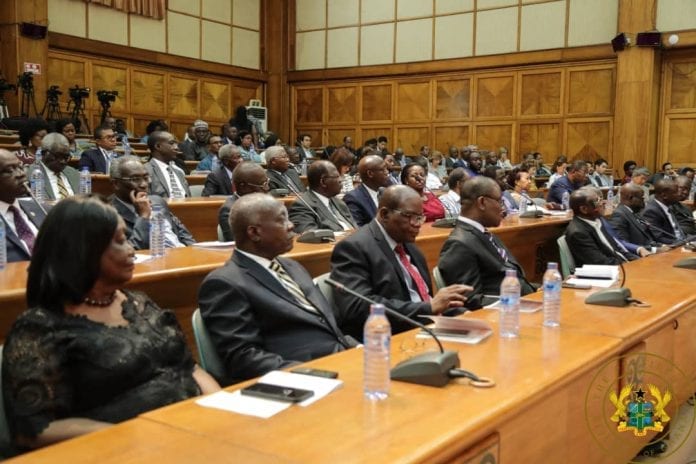 President Nana Addo Dankwa Akufo Addo, has challenged the newly inaugurated Foreign Relations Think Tank, Council on Foreign Relations, CFR Ghana, to do all within their power to assist government to deal with critical Foreign policy and international issues that have direct effect on Ghana’s interest both home and abroad.

Addressing participants at a ceremony to officially inaugurate the Council on Foreign Relations Ghana (CFR Ghana) at the Accra International Conference Centre, President Akufo Addo said “as the saying goes, foreign policy is an extension of domestic policy as one American author rightly put it, “Foreign Policy begins at home”. I will therefore expect CFR Ghana to assist us to keep our eyes on the ball in a manner that allows us to deal with critical challenges at home, on the continent and among multilateral institutions” President Akufo Addo said. President Akufo Addo, also urged the CFR Ghana to ensure a strong bond between them and the Foreign Ministry in order to address any capacity gaps that may hinder their work.

In his remarks, the President of the Council on Foreign Relations Ghana, Ambassador D. K. Osei, indicated that the raisin d’etre for the establishment of the CFR-Ghana is to mobilize the rich and profound pool of Ghanaian experts in international relations, peace and security issues to place their expertise, experience and knowledge at the disposal of the government, international organizations, the public, academia and all those who seek to understand better foreign policy issues and choices of the current times.

Minister for Foreign Affairs and Regional Integration, Shirley Ayorkor Botchwey, in a brief remark challenged the Council to ensure that it ropes in experts from all sectors of the Ghanaian body politic to tap into their rich resources in order to promote Ghana’s international image. She assured the Council that the Foreign ministry would endeavour to work closely with the Council to make their work successful.

Focus of the Council

Membership of the Council

Discussions for the establishment of the Council on Foreign Relations Ghana as a Think-Tank on Ghana’s foreign policy and international relations modelled on similar well-established Think-Tanks such as the Council of Foreign Relations in the US and Chatham House in the United Kingdom, started in 2008-2009 when Ambassador Kabral Blay-Amihere, then serving as Ghana’s Ambassador to Cote d’Ivoire floated the idea with a number of like-minded Ghanaians including Ambassador D. K. Osei, Ambassador Anan Cato, former Ghana High Commissioner to Canada and the United Kingdom and J. K. Mensah, former Director General of the Research Department of the Ministry of Foreign Affairs and International Relations.

The Council was not able to take off and fulfill its aims and objectives after its registration in 2011. In the ensuing years, as global events unfolded with no informed and educated public discourse from veritable experts in diplomacy and international affairs, the need for the revival of the council became more pressing.

Renewed discussions initiated by Ambassadors D. K. Osei, Kwame Tenkorang and Kabral Blay-Amihere, in 2018 have resulted in the second chapter of the Council, an enlargement of the original Executive Council and the adoption of the name, Council On Foreign Relations -Ghana to distinguish it from other existing Councils in the world.