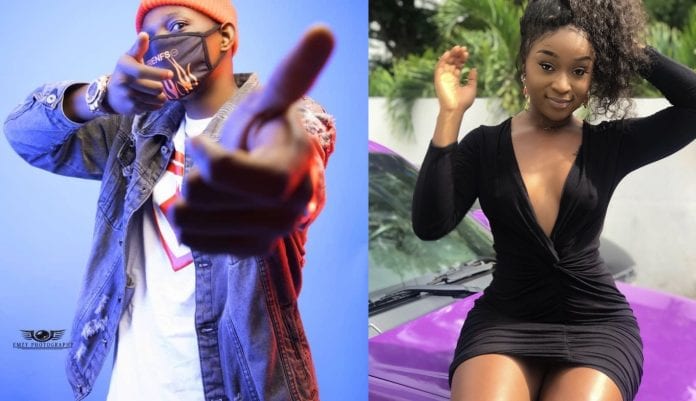 Nigerian rapper ThreeThree talked about how he plans on winning the heart of the Kwese Tv presenter Efia Odo.
During a recent interview with him, ThreeThree revealed to Black Legendary, Tv Efia Odo has for some time now being his female celebrity crush.
ThreeThree said though he has not met the actress in person, he likes her so much and would do anything, even pay $5000 to win her heart.
“I love everything about that girl Efia Odo especially when she smiles it brings a whole different feeling of love to me. Despite the rumours about her being cheap, I like her personality in so many ways that this alone can’t let my feelings for her fade away. ThreeThree stated
Asked if he has had the chance to tell Efia how he feels, ThreeThree said he got to Ghana not long ago and for that reason, he hasn’t been able to have a chat with her but anytime they both meet in person, he will talk to her about this.
In other news, Efia Odo seems to be in love with a sugar daddy. In a video circulating online, the actress was captured introducing this guy by name Jeezy to the world.
ThreeThree finally said he is about to release his EP with most of the love songs dedicated to Efia Odo since he had her in mind when writing them.
Submitted (Black Legendary)

I’ve never had sex with my boyfriend – Efia Odo