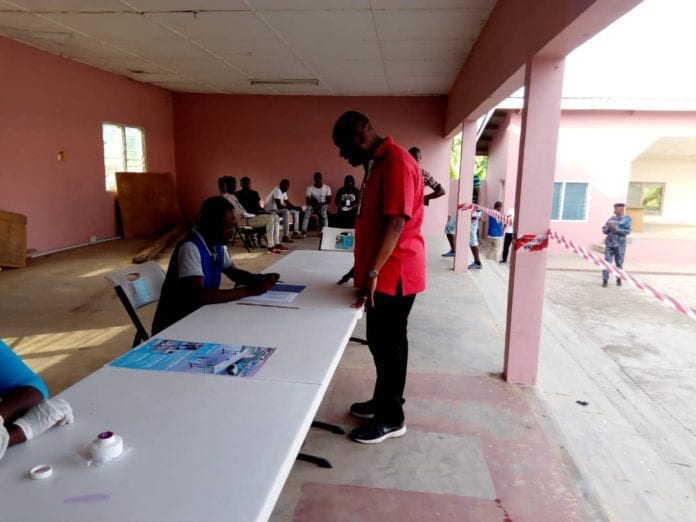 Former Minister of Communication, Dr. Edward Omane Boamah is hopeful former President John Dramani will be given a very fitting percentage in the ongoing Presidential aspirants’ election to demonstrate to Ghanaians the level of trust members of the opposition National Democratic Congress(NDC) have in his leadership.

Dr. Omane Boamah said this in the Eastern Region when he voted at the Hackman Social Center in Oyoko, where the New Juaben North Constituency election is taking place.

“You all know where my vote is – Number 3, His Excellency John Dramani Mahama and I’m confident he will be given a very fitting percentage that will demonstrate to Ghanaians that the people of NDC trust in his leadership and that there was a lot to be done for our nation. Unfortunately, this government has been a major disappointment and there is the need to write the wrongs “.

According to him, the NPP government has been a major disappointment to Ghanaians, and as it is, “hope has given way to hopelessness in Ghana, there is desperation, there is despair”.

The former Communication Minister further mentioned that the mismanagement of the economy by the government has affected the local currency adding that a Mahama-led government in 2021 will fix the currency crises.

“the cedi is wobbling woefully and in the International Community, our currency has become a laughing stock if you check what Bloomberg reported it is nothing any Ghanaian should be proud of”.

About 61 delegates out of 673 had voted as at 8:45am at the voting center in New Juaben North in a peaceful atmosphere.

The Effiduase District Police Command led by DSP Daniel Yaro, the District Commander is in charge of security with not less than 15 Police personnel.

Dr. Omane Boamah, however, urged the party and the security agencies to be vigilante to avert infiltration of sponsored militias to mare the election.

About 29000 delegates are expected to cast their votes in the region. The delegates,he said consists of  branch executives, Constituency executives, Regional Executives, Founding Members, Regional Council of  Elders, Members of Parliament and
, Former Government Appointees who are card bearing members of the party.

Former President John Mahama is battling six others including Second Deputy Speaker of Parliament, Alban Bagbin and Joshua Alabi for the opportunity to lead the NDC into the 2020 general elections where he will likely face his old nemesis incumbent President Nana Akufo-Addo.