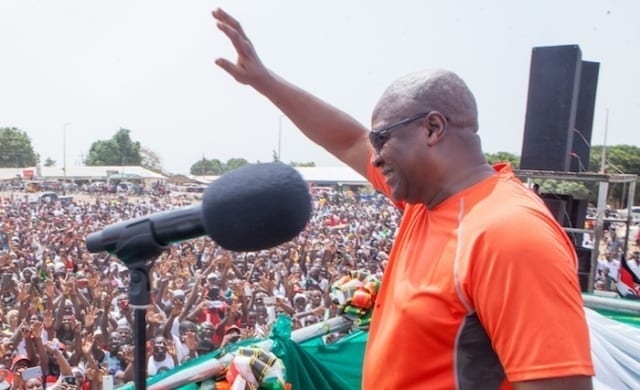 Former President of the Republic, John Dramani Mahama has taken an early lead in the presidential primary of the National Democratic Congress (NDC) which is still underway in some voting centers.

This follows the overwhelming endorsement by delegates in the Zabzugu Constituency after close of polls, three clear hours ahead of official closing of polls.

Mr. Mahama who is seeking to lead the NDC a third time polled 567 votes to create a huge gap between himself and his rivals.

Goosie Tanoh and Prof. Joshua Alabi polled six (6) and 10 votes respectively, with six of ballot reported having been rejected.

Meanwhile, there have been recorded incidents of alleged vote buying and intimation from the camp of the former Ghanaian leader.

Delegates aligned to Prof. Joshua Alabi are reported to have been prevented from exercising their franchise, resulting in altercations which later turned bloody in the Nkwanta South Constituency.

Voting materials have been destroyed as a result of this incident, putting the entire process in limbo, according to media reports.

In Cape Coast, Mr. Mahama is reported to have doled out some money for delegates to use as transport fare after casting their votes despite the party bearing such cost.

There are also reported cases of delegates not finding their names in the voters register at locations where they are expected to cast their votes.

The name of Prof. Joshua Alabi who is also contesting for the vacant flagbearer position is reported missing from voters register where he is expected to cast his vote.