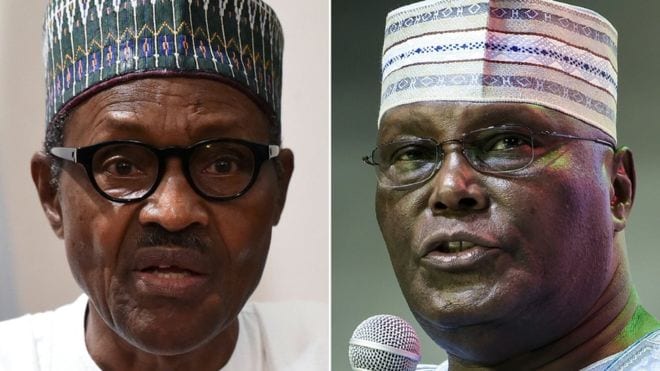 Nigerians are finally going to the polls following a last-minute postponement a week ago.

Mr Buhari says he has built a strong foundation for prosperity but his rival says Nigeria is not functioning.

Whoever wins will have to address power shortages, corruption, security threats and a sluggish economy.

It is not clear when the results will be announced – it could be on Sunday but is more likely to be Monday or Tuesday, or maybe even later.

Why was the election delayed?

The initial vote was rescheduled in a dramatic press conference in the early hours of Saturday 16 February, just five hours before polls were due to have opened.

The Independent National Electoral Commission (Inec) has given several reasons for the delay, including attempted sabotage and logistical issues such as bad weather and problems with delivering the ballot papers.

Inec has said that everything is in place for the poll to take place this time round.

How does the election work?

The candidate with the most votes is declared the winner in the first round, as long as that person gains at least 25% of the votes in two-thirds of Nigeria’s 36 states.

There are 73 registered candidates in the presidential election, but campaigning has been dominated by the two political giants and the established party machines behind them.

The president’s All Progressives Congress (APC) has promised to take the country to the “next level”, arguing that in his first four-year term Mr Buhari has done a lot of “foundational work” that may not be immediately obvious.

Mr Abubakar and his People’s Democratic Party have pledged “to get Nigeria working again”, saying that the president has wasted the last four years.

Both men are from the mainly Muslim north of the country. While they are in their 70s, more than half of Nigeria’s 84 million registered voters are under 35.

What are the main issues?

Nigeria is Africa’s largest oil producer but corruption and a failure to invest the proceeds from the industry have hampered development in the country.

It slipped into a recession in 2016 and a slow recovery has meant that not enough jobs have been created to cope with the large number of young people coming into the employment market. Currently nearly a quarter of the working age population is unemployed.

Mr Buhari has quelled a militant Islamist rebellion in the north-east of the country, but Boko Haram remains active. There has also been an upsurge in violence in the country’s Middle Belt as traditional herders and more settled farmers have clashed.

Up until 1999 Nigeria was governed by either short-lived civilian administrations or military rulers. But this year marks 20 years since the return of democracy.

Mr Buhari was elected in 2015 – the first time an opposition candidate had defeated an incumbent to become president.